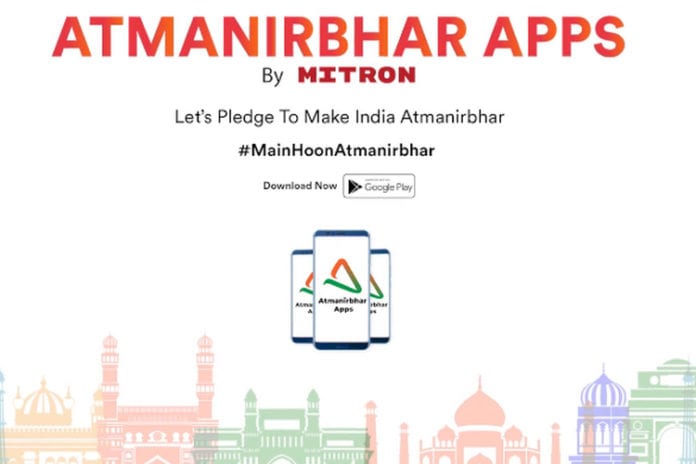 A month ago we were discussing the possibility of a native App Store for the homegrown applications and cut to today, we have “Atmanirbhar Apps” an app store from MitronTV, the company that brought Mitron – a short video sharing platform like TikTok.

Aatmanirbhar Apps is available for free to download on Google Play and has been downloaded by 10K+ users till now. It aggregates around 100 mobile applications made by Indian companies across various categories like Social, Entertainment, Local, Utility, Games, Shopping, Health, News, e-Learning, Business, and Others consisting of miscellaneous apps.

The listing shows the name of the app followed by the size of the app, the numbers of ‘Indians’ who have downloaded the app, and a short description of the app’s functionality. The “Atmanirbhar Apps” functions as more of an aggregator than an App Store as it doesn’t host the app, it just redirects you to the Play Store listing of the app.

This app gives you an option to take a pledge to use Indian Apps, and help in making India a truly self-reliant or ‘Atmanirbhar’. You can also share it with your friends in different templates.

Is Atmanirbhar Apps what Indian developers are looking for?

Well, Atmanirbhar Bharat is no Play Store or App Store. Its reach is limited, and most importantly, it redirects you to the Play Store instead of offering you the app directly working more like a portal than an app store. So, it’s not what the Indian startup ecosystem or developers were looking for, but it sure is a baby step towards that journey. It’s helping small homegrown developers to get the limelight by featuring them, and it’s also promoting India’s mission of being self-reliant or ‘Atmanirbharta’.It also sparks a debate on the need for a native ecosystem that promotes indie applications.

So if you’re an Indian app developer looking out for some recognition, then Atmanirbhar Apps is a great platform, though cringy, for you to showcase your application in times when the demand for a Made in India app is growing.