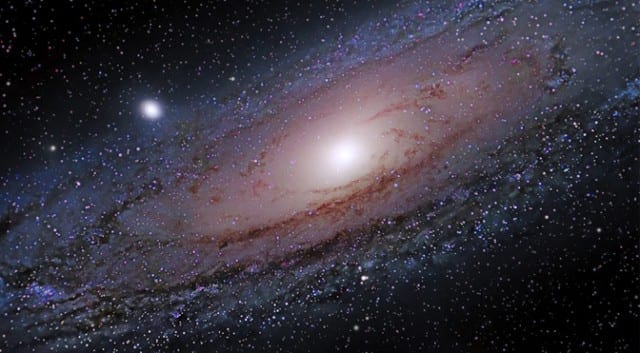 The Milky Way Galaxy is headed for a collision with the Andromeda Galaxy! Yes, you heard right! Although this merger isn’t due for a several billion years, curious astronomers have found a bunch of merging galaxies theorizing a rough idea about what the merger would be like.

Galaxy mergers are really common. In fact, the Milky Way probably swallowed some smaller galaxies over its long history. For the study, which was published in Nature, the astronomy team looked at dozens of nearby galaxies using NASA’s Hubble Space Telescope and Hawaii’s W.M. Keck Telescope.

The team spotted about twenty galaxies undergoing mergers which was pretty amazing according to Michael Koss, the lead author of the study. “In our study, we see two galaxy nuclei right when the images were taken. You can’t argue with it,” he said, adding, “It’s a very clean result, which doesn’t rely on interpretation.”

The study uniquely managed to capture black holes in a late stage of the merger process when they’re usually difficult to see due to immense gas and dust. This has never been done before. Most previous studies captured the galaxy centers when they were 10 times farther.

The study was successful due to the intelligent use of both the Hubble and Keck telescopes together. While Hubble’s X-ray data pointed towards the merging galaxies, Keck’s infrared eyes made it possible to see through the dust and gas blocking the view. Of the nearly 500 galaxies surveyed, roughly 17 percent of them had merging black holes in their centers.

After this successful research, the astronomers are eagerly awaiting the launch of NASA’s James Webb Space Telescope. This observatory is set for launch in 2021. It is estimated to show a much better view of merging galaxies with its infrared cameras. The telescope can even measure the mass and growth rates of the black holes that are closest to it.

The future, although a little dicey, is looking bright. It will be interesting to see the pictures from the new telescope and gain further insight into these intriguing findings.