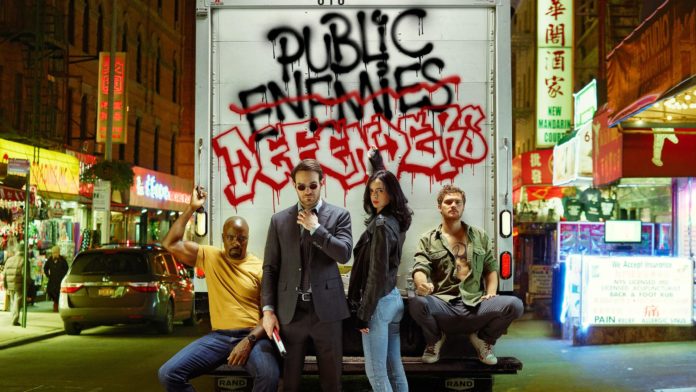 When it was announced that Marvel entertainment had got the rights to Daredevil back, fan anticipation reached new heights, hoping that the character would be given justice finally. Come 2015, and the first season of the show based on the eponymous character was released on Netflix to rave reviews. The show presented itself with a new take on the streets of Hell’s Kitchen which, while still technically part of the Marvel Cinematic Universe, gave everyone a surprise by telling a dark and mature story. This gave way for similar characters to be expressed on the streaming service like Jessica Jones, Luke Cage & Danny Rand (aka Iron Fist), much in the same way that Daredevil was. It was evident that the studio was trying to emulate the success of The Avengers on a much smaller, deeper scale. And after over 60 hours of excellent television, we now have the culmination of that project : The Defenders.

The show picks up where we left off with each of the 4 main characters, all of them still trying to adapt to a normal life after the misadventures they’ve been through. Matt Murdock has left being the Devil of Hell’s Kitchen, and has resorted to a quite life as a lawyer. Jessica Jones is still getting drunk while trying to ignore the many cases she’s being presented with. Luke Cage, after his incarceration, is back on the streets trying to do good. And Danny Rand, who it seems is the most active of the Defenders, is hunting down members of The Hand with Colleen Wing.

Now, if you haven’t watched their solo series, it’s fine. You won’t be completely left in the dark. However, it would be recommended that you watch at least the first and last episodes of them just to get in to the head space of these people. Or search for a video on Youtube doing the same (this one might help). It must be said that while the Defenders are the main focus of the show, there is a lot going on with their supporting characters as well. So rest assured, longtime viewers will be awarded heavily for having binged those shows, especially Daredevil.

While seeing the Defenders on screen together is amazing, the show does take some time to setup this inevitable meetup. In fact, almost half of the show is spent individually with those characters to show how they are handling things on their own. It’s only after episode four that we get to see all of them interacting as a ‘team’. Note the quotation. Being such complex characters, it can be said that they don’t get along too easily. Much of the show focuses on them dealing with the fact that they have to become a team player. And while that focus is shifted on each of them, I’d have to say that Daredevil and the Iron Fist are more integral to the story than the other two, mainly due to the fact that the threat they’re up against has impacted them on a deeper level in the past, as we have seen in their respective shows.

Marvel has proved in the build up to this crossover that they can deliver a realistic, mature and violent take on their characters time and again. This time too, they deliver. Expect limbs to be severed when the fighting starts. While it does feel sometimes that the excessive violence is a bit too much, it has already been established the characters live in, and with that the violence actually serves the story and the setting.

Coming to the characters, Matt is still reeling from the devastating events involving the death of Elektra by the Hand. Having given up the mantle of the Daredevil, he continues to fight for justice by being a daytime lawyer. Although he’s doing good for himself, it’s clear that the result of him being a masked vigilante has driven the people closest to him away. Both Foggy and Karen talk to him, but still he struggles to not put on the suit whenever he hears the distant wails of innocent people. It is only when he sees how big the threat of The Hand is when he finally decides to suit up. Once again Charlie Cox gives a stellar performance, proving once again how the man without fear can also feel vulnerable when certain situations arise.

For all the missteps the first season of Iron Fist took, they all seem to have been rectified here. Taking a slightly comedic take on the character during the team’s many interactions, Finn Jones gives a likable performance as Danny Rand. Having spent an entire season trying to regain control of his million-dollar company, he finally puts that authority to good use a la Tony Stark in The Avengers films. Colleen Wing is a welcome addition to the show, and truly deserves to be a core Defender even though she isn’t the main focus of the show. Who know, maybe next season she will be one. Although it has to be added that her involvement in the plot is quite heavy and may rely upon viewers to have watched Iron Fist (a task that may put off people given how the show’s ratings).

Coming to Jessica Jones (played by Krysten Ritter) and Luke Cage (played by Mike Colter), both of these characters have the least amount of connection to The Hand so the gravity of the situation isn’t as heavy for them as it is for the others. This provides for a lot of fun moments when all the mystical things are being explained to them. While their characters have been fully developed, I do have a thing or two to complain about, especially when it comes to their powers. Jessica can pick up a car without much effort but can be taken down in a normal fist fight ? Small things like these really do take you out of the experience makes you ask more questions that you should, and it is these small errors which harm the show. Luke, while being a likable character, still suffers from lack of depth. Or rather, lack of better material to be worked with. He’s fun to watch but compared to the emotional turmoil that Murdock has been through, he seems to take things way more casually than he should.

As for the antagonist, Sigourney Weaver gives a great performance as Alexandra, leader of The Hand. Her character has a certain sense of vulnerability. By not being a by-the-books villain, it’s fun to see her engage and manipulate the Defenders in order to get what she wants. A core aspect of the season is her interaction with a resurrected Elektra, or the Black Sky as she is known by at this point. She guides this new Elektra to do her own evil, and it is through these interactions that we actually get a taste of her mindset and determination. However, with a lacking backstory there is little to care for the character, and as such the contrast between her story and the Defenders’ is very noticeable. This does weaken the her status to a certain extent. Also, add in the fact that her ‘grand plan’ doesn’t make much sense, and you have a weak villain disguised by good acting.

Élodie Yung returns as Elektra, and she truly shines in the role. Being an almost new character, she has an amazing physical presence and is a formidable opponent for the Defenders to tackle. Her inclusion also leads to a lot of heated scenes with Matt, and she tackles them with much ease. The mental battle that is going on between her old memories and her new self is perfectly captured. To draw a parallel, it might remind viewers of Bucy Barnes (aka The Winter Soldier) from the MCU films. Likewise, both characters share a similar territory when it comes to morally ambiguous character choices. However, her motivations do not always line up with what we’ve been led to believe, and that comes in the way of giving us a truly well realized character such as Vincent D’Onofrio’s Kingpin.

Claire Temple (Rosario Dawson) also makes a return and provides an almost ‘Nick Fury’ type of role in assembling the Defenders. Being the only character who actually knows each and every one of the Defenders, it makes sense that she would be the one to help unite the four. Other than that though, she doesn’t provide much and is used as much as is needed, no more, no less. Another character that makes a prominent return is that of Misty Knight (Simone Missick) from Luke Cage. Her character, while gracefully acted, does stand in the way of the pacing of the show a lot. You understand where she’s coming from, having a bone to pick with the vigilante system, and this does extend the time that the Defenders have to navigate through instead of punching bad guys. While she is enjoyable, it would have been in the better interest of the writers to not use her as much as, or rather as frustratingly as she is used.

Ultimately, the show gives the fans what they have wanted ever since the day of the announcement of the series. Excellent characters, well-choreographed action along with comic book mythology kept us engaged in the story of the Defenders and we cannot wait for them to return. A binge-worthy experience.