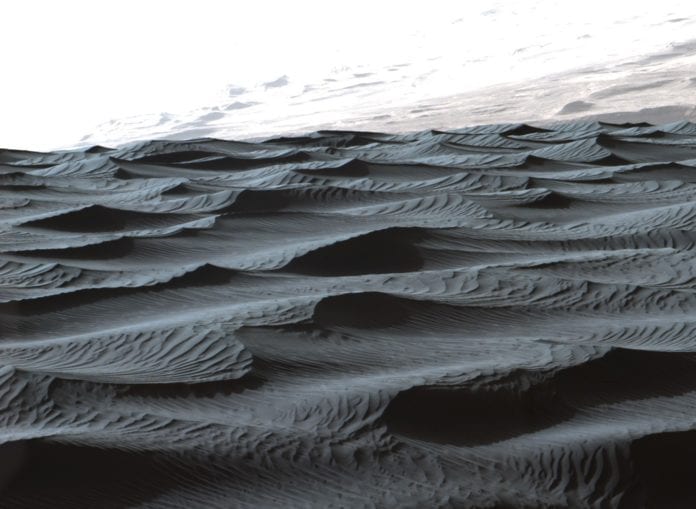 Mars has many geological features that are like Earth in multiple ways. The formation of the common substances found on the surface is one of them. The atmosphere on Mars is also comparable to Earth, and it facilitates many weather phenomena that can be observed on Earth, however, the scales might be different.

Researchers have observed that the Martian surface has another geological feature that resembles the Earth’s geological features. Researchers have observed huge sand waves or ‘mega ripples’ on the Martian surface which appear to be moving structures, contrary to the previously held belief that these ‘mega ripples’ are ancient structures that have been stuck in place.

Similar travelling sand structures are also found in the desserts here on our planet. These mega ripples are composed of chunkier, coarser sand grains that sit on top of the crests, which are made out of finer particles at the bottom.

The previous belief that these structures were immovable was drawn from the fact that these particles are heavy, and wind on Mars is generally lightly blowing due to its thin atmosphere. The new research has proven this to be wrong without any doubts.

Researchers from the INAF Capodimonte Astronomical Observatory in Italy conducted a study that arrived at the conclusion that these were flowing ripples. The observation had to be very astute to catch these ripples moving around. This was not an easy task. It required a lot of man-hours and some ingenious application of astronomy.

The researchers compared the images taken by the Mars Reconnaissance Orbiter over several years. The scrutiny of these images confirmed the doubts of the researchers that the mega ripples were moving, albeit very slowly. The average speed of the recorded ripples was about 12 centimetres a year, which could go up to a speed of 19 centimetres a year.

The previous studies had compared different images that were one or two years apart. This would not let them catch the ripples moving. It has been made possible now because of the availability of 10 years of data from the Martian surface.

The ability to see these ripples means that we have improved our observational abilities to a great extent, and we could also hope to find other interesting facts about mars, which could potentially help us with our colonization efforts.