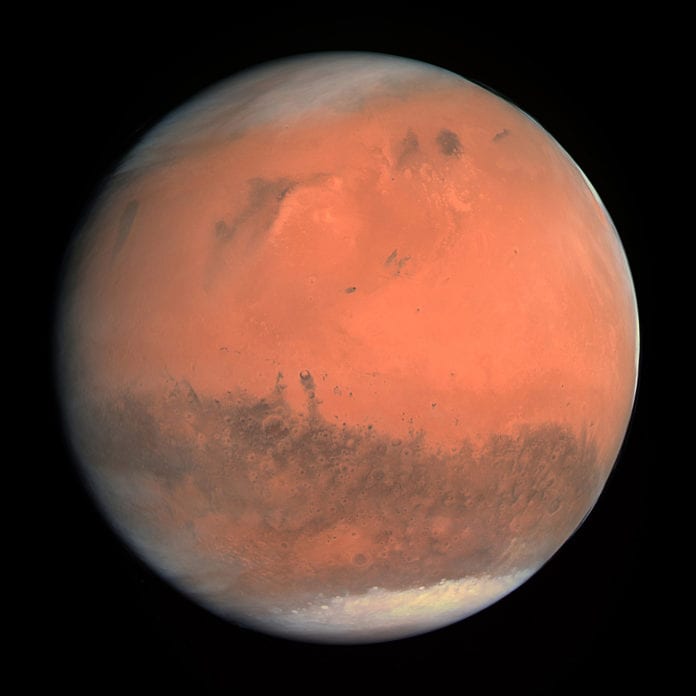 Mars might be the next target of interplanetary human exploration. The proximity of the planet to Earth and it being in the habitable zone of the Solar system means that not only is it reachable, but it might also already have ingredients necessary for any planet to host life.

In our attempts to send human missions and eventually human colonies to Mars, we would be greatly aided if certain things were readily available on the red planet. The fundamental requirements are oxygen, water, and fuel. The Martian atmosphere does not have oxygen. We know that for sure, the other two are still topics of contention.

A new study that has recently surfaced suggests that brine water could be present on the Martian surface. The fact that this might resemble the oceans on Earth does not mean that it does. The Martian atmosphere remains as hostile as ever. The possibility of brine puddles is slight because of multiple reasons. The surface is very cold, and liquid water cannot last very long on the Martian surface. The average temperature on Mars is about -48 degrees Celsius, which is 25 degrees below the known tolerance level of plants and animals of Earth.

However, water with some mixed in salts might be able to stick to the surface for a bit longer. NASA’s Curiosity and Phoenix landers have detected the presence of certain salts known as perchlorates in the Martian soil. This piece of evidence points directly to the possibility that transient brines might be possible. Although salty liquid water has never been reported to be found on the Martian surface, there are certain traces of water dribbling out from underground and a contentious report which claims that there might be an underground lake near the frigid and unforgiving Martian South Pole.

The possibility of the existence of brines on the Red Planet has excited a lot of researchers. Scientists have started running computer simulations to know a bit more about how brines would behave in contemporary Martian conditions. Scientists at the Lunar and Planetary Institute in Houston found that one type of brine could remain liquid on the planet’s surface. Just a few centimetres below the surface, it could remain for up to six consecutive hours. The areas where this could happen stretch for about 40% of the Red Planet. These areas mainly lie at the middle to high northern latitudes.

This finding could prove to be highly useful for future missions to Mars. If the water on Mars is found to be uninhabitable by life, certain strict measures that have to be taken to prevent any microorganism from Earth leaking into the Martian surface might be eased a little.