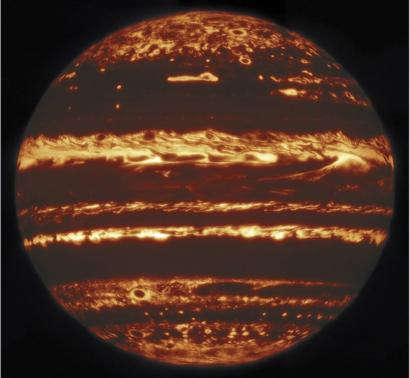 Astronomers have managed to produce awe-inspiring new images of Jupiter by tracing the glowing regions of warmth that lie beneath the gas giant’s cloud tops. The technique used is called “Lucky Imaging”. This technique involves capturing a large number of short-exposure images and keeping only the sharpest ones, when the earth’s atmosphere is comparatively stable.

The observations were captured by the Gemini North telescope, on Mauna Kea, a dormant volcano in Hawaii. The results reveal lightning strikes and storm systems forming around deep clouds of water, ice and liquid. The images show the warm, deep layers of the planet’s atmosphere glowing through gaps in thick cloud cover in a “jack-o-lantern”-like effect.

From a lucky imaging set of 38 exposures taken at each pointing, the team selected the sharpest 10%. Finally, to make one global view of the planet, stacks of exposures at the nine pointings were combined.

Galileo had first laid telescope-enhanced eyes on Jupiter. Since then, scientists have continued to study the curious world from both the ground and the sky. In 1979, NASA’s Voyager 1 and 2 spacecraft zipped past the gas giant and took tens of thousands of pictures. The data revealed the existence of smoky rings around the planet.

NASA’s Juno spacecraft began orbiting Jupiter in 2016 and it quickly started sending back breathtaking images. Juno sent some of the first detailed looks at the planet’s poles. It revealed cyclone swarms gyrating on the surface with roots that likely extend deep below the upper bands of the clouds. Over the past three years, researchers have used imaging of Jupiter to understand Jupiter’s wind patterns, atmospheric waves, and cyclones.

The Gemini data gave researchers a glimpse into the deep water clouds. It provided them with another tool for estimating the amount of water in Jupiter’s atmosphere. This is important for understanding how Jupiter and the other gas and ice giants had formed.

The information collected also helped researchers confirm facts about the Great Red Spot. What appeared as a dark spot was actually gaps in the cloud cover and are not cloud colour variations, as previously believed.

The scientists also studied Jupiter’s “gigantic” storms. These include vertical clouds called “thunderheads” that are 40 miles long from base to top. These are five times taller than typical thunderheads on Earth, according to NASA. The images from Hubble and Gemini are also helping scientists study many other weather phenomena on this peculiar planet. Researches include changes in wind patterns, characteristics of atmospheric waves, and the circulation of various gases in the atmosphere.

Facts you didn’t know about Jupiter:

1. Its core could be a solid diamond– The idea put forth by the legendary science fiction writer Arthur C. Clarke suggested that the crushing pressures present at Jupiter’s core are more than capable of rearranging atoms of carbon into a new allotrope – diamond. The element remains the same; it only has a different orientation.

2. It’s less a planet and more a failed star- So big, yet so far away. Jupiter is a massive reminder of what could have been. Had it only accumulated about ten times more stellar detritus when forming, the planet could very well have built up the mass necessary to fuse “heavy hydrogen,” also known as deuterium, and thus become a dwarf star. So, the Earth would then technically be part of a binary star system. Two suns would grace our skies.

3. It contains an ocean of metallic hydrogen– NASA’s Dauna Coulter describes that farther down into the atmosphere, immense pressures “squeeze the electrons out of the hydrogen atoms and the fluid starts to conduct like a metal.”

4. It occasionally rains neon- Neon is a fairly light gas, about two-thirds the density of the air we breathe. Jupiter contains a trace, yet a noticeable amount of the element. Yet strangely, satellite readings have shown that a mere ten per cent of it exists in Jupiter’s outer atmosphere. Because of Jupiter’s colossal pressures, neon gets squashed into liquid form and it starts to fall like rain.