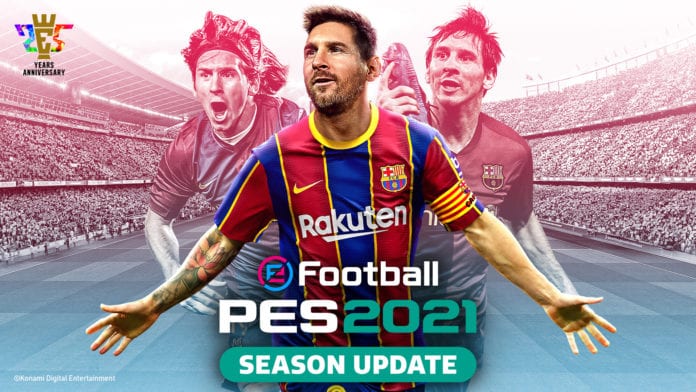 Konami Digital Entertainment B.V. has today officially revealed eFootball PES 2021 SEASON UPDATE, the latest title in the eFootball PES franchise. The new game will be available for PlayStation 4, Xbox One and PC (Steam) from September 15th starting at RRP €29.99 / £24.99, with pre-orders open from today.

eFootball PES 2021 SEASON UPDATE(PES 2021) delivers all the critically acclaimed features and gameplay from eFootball PES 2020 that was awarded “Best Sports Game” at E3 2019, plus more. Boasting the latest player and club data for the new season, the game also includes the exclusive UEFA EURO 2020™ mode and content in advance of the rescheduled real-life tournament.

As the eFootball PES franchise celebrates its 25th anniversary since its debut in 1995 and over 100 million copies sold, KONAMI invites football fans all over the world to join them once again as they head out onto the pitch for a new action-packed season of football and prepare for the future.

“As we take the necessary time to lay the foundations for the future of the eFootball PES franchise, it is important for us to look back at our legacy and continually strive to improve all aspects of the game.”

“PES 2021 provides our players with award-winning gameplay and the latest season data, plus fully-exclusive teams and content, at a compelling price. I want to thank those players and our dedicated community for their support as we transition to the latest hardware and an all-new engine that will redefine football simulation.”

eFootball PES 2021 SEASON UPDATE will be available from September 15th for PlayStation 4, Xbox One and PC (Steam). The Standard Edition of the game will be available in India at Rs. 2,199 for PS4 and Xbox One on major online retailers. Pre-orders are now live on Games The Shop.