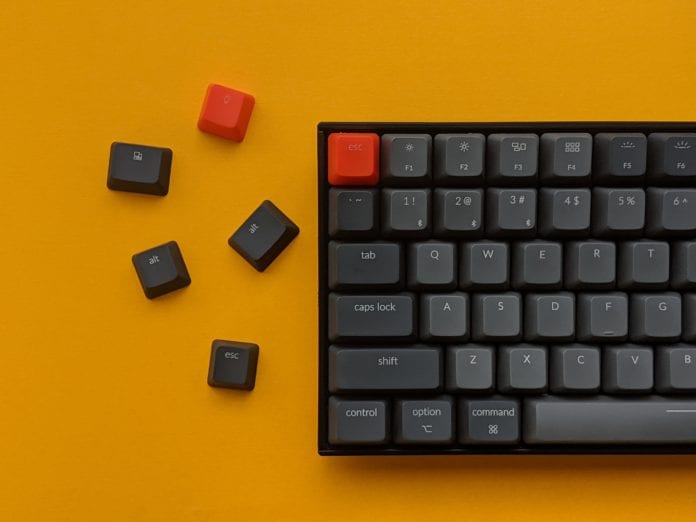 Ever since I got the 2018 Macbook Air, the butterfly keyboard on it has been a headache. A month into using it, I had already started searching for a keyboard. My scavenging phase brought me to the Keychron K2 V2 mechanical keyboard. Amazingly, folks at Keychron were more than happy to let me try out the typing weapon of choice from my dreams, the Keychron K2 V2.

So here are my thoughts on the Keychron K2 V2. Apologies for the spoilers, but it’s quite literally the best mechanical keyboard you can get if you’re tired of your MacBook’s stupid butterfly keyboard. The cherry on top is that it is wireless!

Just like any other mechanical keyboard, the K2 V2 is beefy and quite hefty, giving a sense of durability. However, if you’re looking for something more robust then you can always go with the aluminium frame, which will cost you a little extra money than the normal one, and it’s worth it but then forget about being able to carry it around in your backpack.

As said earlier, the Keychron K2 V2 is a somewhat smaller keyboard with 84-key and without a number pad. But, honestly, this isn’t a dealbreaker as almost every laptop, either Windows or Mac, comes with the same keyboard layout, making K2 V2 an easy choice for laptop users looking for a mechanical keyboard, especially the one’s using MacBooks. But, on the other hand, it could be a bummer for gamers and lovers of the traditional number pad.

The K2 I am testing out is an updated version of the original K2. The second-generation K2, or as Keychron prefers to call it, K2 V2 comes with an inclined bottom instead of a flat one, claiming to improve your typing experience. Opening up the pair of feet underneath gives you a dramatic inclination, which could make your typing experience better or worse, depending on how much inclination you prefer. It’s not a huge issue; you can always use a palm rest if you’re not used to inclined keyboards. Either you can use the palm rest you have already, also if it’s full size, or you can get a new one from Keychron.

You can find the USB Type C port used to connect it to your Mac or PC on the left side of the chassis. Then there are two toggle buttons, one for switching between Mac/iOS or Windows/Android modes, and another one is to toggle between Bluetooth or USB mode or turn off the keyboard altogether.

People get a mechanical keyboard for the tactile feel while hitting a key and that crisp sound of a click. Of course, the amount of tactile feedback and sound depends on one’s preferences, but I like it to go rogue, but was I satisfied?

So Keychron K2 V2 comes with Gateron switches, and mine had the blue ones. So the Blue Gateron switches offer the most clicky tactile feedback, and I was pretty impressed with it during my time with it. It took me a couple of hours to get used to it, but now I don’t know how to use my MacBook’s keyboard again.

If you don’t want to upset people around you, I suggest you go with either Red or Brown switches for a less noisy environment.

So by default, the K2 V2 comes with the Mac keycaps, and you can always take out the keys and replace them with the Windows one. However, you can’t change the switches that easily if you’ve got the standard K2 V2, but if you want to have complete control over your keyboard, then you can go for the hot-swappable version.

I am not a big fan of my keyboard changing backlight colours every second. But, many people do consider RGB backlighting as a feature, and if you’re one of them, you won’t be disappointed. But, even if you’re not one of them like me, then K2 V2 has you covered, with some subtle backlighting options.

To be clear, this is not me suffering from RGB syndrome; Yes, it’s real. But, the backlighting effects on K2 V2 look fantastic while making it comfortable to work during the dark. However, if you hate RGB lights from the bottom of your heart, opt for the white LED backlight option, and save some of your lunch money.

The Keychron K2 V2 features Bluetooth 5.1, which is a huge upgrade over the original K2’s Bluetooth 3. So what does that means? It means reliable connection, but how does that work out in real life? I haven’t faced any issues while connecting it with different devices, nor did I face any hiccups while working on it.

Moreover, with Bluetooth 5.1, you can connect the K2 V2 with three devices simultaneously, and switching between them is a piece of cake; all you need to do is press fn+1/2/3. Well, it’s seamless for sure, and it’s one of the underestimated features that ends up being used the most.

The main reason I started looking out for a mechanical keyboard was Apple’s issue ridden butterfly keyboard. The minimalistic design of the K2 V2 complements the MacBook and adds an elegant touch to my work setup (I don’t have a work setup, but it would be a great addition to yours). The RGB backlight effects are subtle and aren’t thrown at your face. The best thing about K2 V2 is its ability to connect with multiple devices and its battery. There’s not much to complain about the K2 V2, but maybe figure out a perfect inclination for the next version, Keychron?

That said, Keychron K2 V2 is a great entry-level mechanical keyboard for those who want to dive into the sea of mechanical keyboards at a starting price of ₹6,899.00. Moreover, if you’re a Mac user, get the K2 V2 instead of spending your hard-earned money on a keyboard that is anything but magical. If you’re still not convinced then, you need to try out my MacBook’s keyboard because then only you’ll understand the value of a good keyboard.