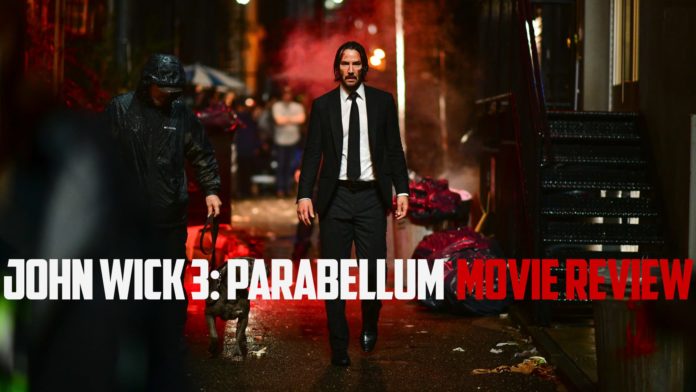 When the first John Wick came out in 2014, no one believed it to be the smash hit that it was. Keanu Reeves had finally found a franchise to show off his talents in gritty action, and the film had a distinct style which none of its competitors could match. The films’ success led to a sequel, which was even bigger, and arguably better than the first. You don’t have to be a detective to guess that a third installment was on its way, and here we are.

John Wick Chapter 3: Parabellum takes place moments after Chapter 2 ended. We find John (played by Keanu Reeves) being hunted by every hitman out there, with a massive $15 million bounty on his head. With no safe house like the Continental to turn to, our hero has to find a way to dig himself out of this hellhole.

Right from the start, the film reminds us of the gritty, yet stylized world that it inhabits. It further expands on the world building that the previous 2 installments had laid out, adding new instances of this secret underworld lurking right beneath our noses.

Chad Stahelski has returned to direct and with him comes his incredible sense of style. His willingness to up the action from the last installment is fully on display here, with the most number of set pieces present in this installment. And that translates well into the pacing too, with the film’s first act being one of the fastest we’ve seen in recent times. It’s only around the second act that the film starts to drag, if only for plot purposes.

Joining Reeves in action veteran Halle Berry as Sofia, with whom Wick shares a mysterious past (spin-off ideas?). Berry proves again just how strong of a presence she can bring to a film like this, which is already filled with an incredible cast. And while her role here isn’t as big as the trailers would have you believe, it’s still fun to watch her beat bad guys to pulp with the help of her trusty dogs. In a franchise where the main draw is Gun-Fu, to see dogs having a go at is immensely satisfying.

As for the returning characters, Ian McShane is back as the ever so mysterious Winston, this time with a side-plot entirely dedicated to him. It’s a shame though that most of it is spent alongside The Adjudicator (Asia Kate Dillon), as the plot goes nowhere. Laurence Fishburne also returns, if so in a smaller capacity. I will say though that the film leaves enough breadcrumbs (and one giant cliffhanger) that promises a bigger role for both of them in the next chapter (and yes, we’re getting one).

In any case, John Wick Chapter 3: Parabellum provides for 2 hours of great entertainment. We all know you’re not going to watch this movie for its story, which itself is pretty serviceable. Instead, the franchise’s strong suit has always been its incredible action set pieces, of which there are plenty here.

Would I have wanted the franchise to end as a trilogy? Yes. Am I still looking forward to the next installment? Heck yes. In an age where Mission Impossible and James Bond are still alive and kicking franchises, we need a John Wick every few years or so to come out and show those guys how it’s done.