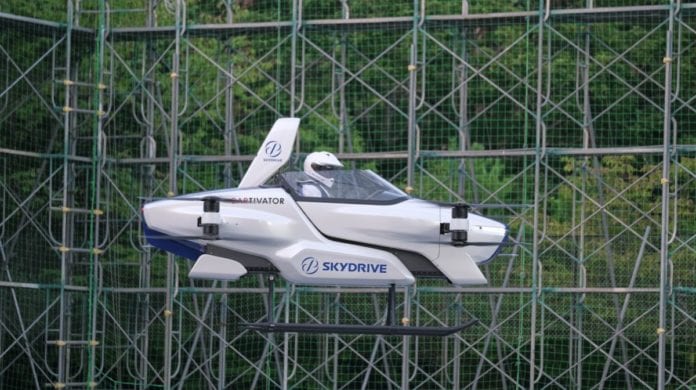 The age-old dream of zipping around in the sky as easily as driving on highways may just come true! Japan’s SkyDrive, among the swarm of “flying car” projects around the world, has carried out a successful test flight with one person on board. The test flight took place at a field owned by Toyota in central Japan earlier this month. The sleek, futuristic ride looks like a cross between a one-man helicopter and a Smart car. The vehicle hovered in the air, over a netted area, for four minutes.

Tomohiro Fukuzawa, who heads the SkyDrive effort, hopes “the flying car” can be made into a real-life final product by 2023. Very soon, the common man might have access to a flying car. At a press conference, the company showed a video of the car flying where it was seen flying up to 2 meters (about 6.5 feet) above the ground. According to Tomohiro Fukuzawa, making it safe will be a major challenge.

The companies that funded the Flying Car

The work on the SkyDrive project began in 2012 as a voluntary project called Cartivator. The project is funded by Japanese companies including automaker Toyota, electronic company Panasonic and video-game developer Bandai Namco. A test of the car was done three years ago which failed. The demonstration three years ago went poorly but it has improved exponentially since then with the project having recently received 3.9 billion yen (about Rs. 271 crores), including that from the Development Bank of Japan.

Many people want to fly such a car

Similar projects by more than 100 companies have been going on for a while now, worldwide. Many companies have been working on building a similar model for the past several years, but now this dream is becoming less illusory. In the press conference, Tomohiro Fukuzawa said that this car can only fly for 5 to 10 minutes, but its flight time can be increased to 30 minutes.

A representative from the firm said that the “Jetsons” lookalike might elevate transportation to new heights (quite literally). The Japanese government has an optimistic vision, with a “road map” for business services. They hope to expand it to commercial use by the 2030s. It has a lot of potential for connecting remote areas and providing lifelines in disastrous times.

Although many safety improvements are needed first, in addition to battery sizes, air traffic control and other infrastructure pose challenges to the creators of eVTOL (electric vertical takeoff and landing). There are issues and potential challenges that need to be dealt with so as to commercialize the flying vehicle.

Lilium of Germany, Joby Aviation in California, and Wisk, a joint venture between Boeing and Kitty Hawk, are also working on eVTOL projects. Sebastian Thrun, chief executive of Kitty Hawk is of the opinion that aeroplanes, cell phones, and self-driving cars take time to win acceptance.“But the time between technology and social adoption might be more compressed for eVTOL vehicles,” he said.

Unlike general aeroplanes and helicopters, eVTOL vehicles offer quick point-to-point personal travel, at least in principle. They could easily avoid the huge lines and hassle of airports and traffic jams. Sans the cost of hiring pilots, they could fly automatically as well.