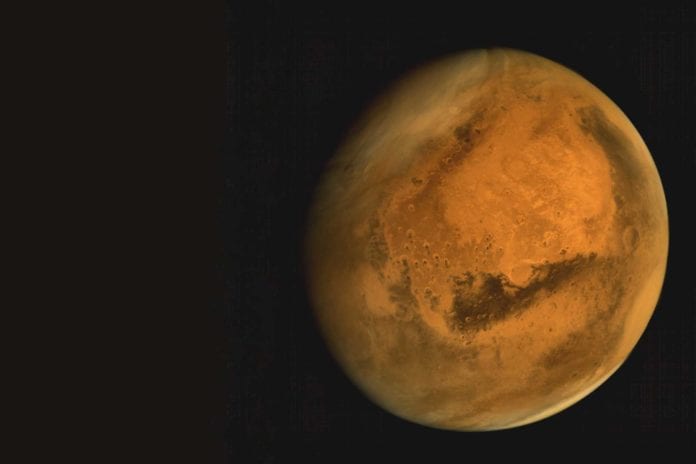 The Indian Space Research Organisation (ISRO) has recently shared a picture of Mars’ biggest moon, Phobos. This is the latest achievement in the field of technological advances made by ISRO. ISRO captured the picture on the 1st of July with the Mars Colour Camera when MOM (Mars Orbiter Mission) was 7,200 km from Mars and 4,200 km from Phobos.

Phobos has been referred to as the biggest moon of Mars which is also described to be “mysterious”. Mangalayan launched on November 5th, in the year 2013, by PSLV-C25. PSLV-C25 is a launch system and this expendable launch started orbiting around Mars the following year in September.

ISRO has posted an update on their official website stating, “Mars Colour Camera (MCC) onboard Mars Orbiter Mission (MOM) has imaged Phobos, the closest and biggest moon of Mars, on 1st July when MOM was about 7200 km from Mars and at 4200 km from Phobos,” the post further added this particular detail that read, “Spatial resolution of the image is 210 m.”

This is a composite image generated from 6 MCC frames and has been colour corrected. The PSLV-C25 rocket that had launched from the Satish Dhawan Space Centre had reportedly completed 66 crore kilometres and had entered the Mars Orbit on 24th September during the first attempt.

This ‘mysterious’ moon Phobos, mainly constitutes carbonaceous chondrites. “The violent phase that Phobos has encountered is seen in the large section gouged out from a past collision (Stickney crater) and bouncing ejecta,” the post on the official website said.

“Stickney, the largest crater on Phobos along with the other craters (Shklovsky, Roche & Grildrig) are also seen in this image,” added ISRO.

Indian Space Research Organisation’s (ISRO) Mars Orbiter Mission is also popularly known as  Mangalyaan, which was supposed to function for half a year initially, as per ISRO’s indication. ISRO later made claims opposing the same that said Mangalayan can keep functioning for “many years” than it had estimated as it hasn’t run out of fuel.

Mangalayan has been provided with five instruments which include a sensor that is responsible for tracking methane gas also called marsh gas. The other instruments that Mangalayan is equipped with are a colour camera, thermal imaging spectrometer which primarily maps the surface and mineral wealth of Mars.

Mars is known to have two moons with Phobos being the innermost and also the larger one. These two moons were discovered in the year 1877. It took 450 crores and 15 months to make Mangalayan. Phobos is named after the Greek God Phobos, who is the son of Ares (Mars) and Aphrodite (Venus).