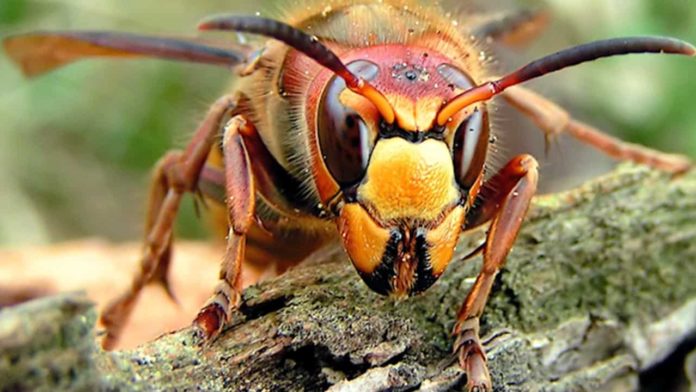 Vespa Madarinia, commonly known as the Yak-Killer hornet or the Murder Hornet, has now set foot in the US. As if things weren’t already going south in the States, the invasion of this vicious behemoth sure does complicate things by a bit.

Falling under the genus Vespa, the Asian Giant Hornet is the largest hornet in the world.  Stretching to 2 inches in length and having an anomalous wingspan of 3 inches with a stinger filled with potent venom, this is one freak of an insect. Characterized by its outlandish size, the Murder Hornet has shark fin-like mandibles and a dark brown thorax armed with a 10 mm stinger. The venom’s potency is almost unparalleled in the insect world, with the exception of the Bullet Ant. A neurotoxin called mandaratoxin is an important component of its venom, and the fatalities include anaphylactic shock or cardiac arrest. Multiple stings could lead to organ failure.

Coyote Peterson from Brave Wilderness, a guy notorious for taking stings from some of the deadliest insects in the world, went face to face with this nightmare and the end result was not pretty.

Moments after the sting, he said, “oh man! wave of dizziness real quick“

“Searing pain! Absolute searing pain!” Coyote said, as he was grunting through the hellish ache.

Though the hornet can be found all over south and southeast Asia, it’s predominantly present in Japan’s rural areas and in some parts of China. The hornet kills an average of 30-40 people every year in Japan. In 2013, it caused 41 deaths and injured over 1600 people in Shaanxi province, China.

Murder Hornets are intensely predatory and invasive. At the sight of a beehive, they charge. These hornets have an abnormally savage killing tactic – decapitation. After rendering the entire colony headless, they proceed to consume the larvae and establish their dominance.

It was this ferocious practice of the Yak-Killers that first brought attention to their entry into America. In late 2019, a beekeeper in the state of Washington found hundreds of headless bees on the ground. The first hornet was spotted last December. It is speculated that they might have entered the US through Asian cargo.

The Washington State Department of Agriculture has issued warnings not to pursue these insects on sight (check the cautionary post here- https://agr.wa.gov/departments/insects-pests-and-weeds/insects/hornets). The Giant Hornet has the potential to pose a threat to the beekeeping industry and raise serious public health concerns. Containment efforts have already begun, entomologists have started trying to locate the hives in Washington. Only time will tell the severity of the invasion.