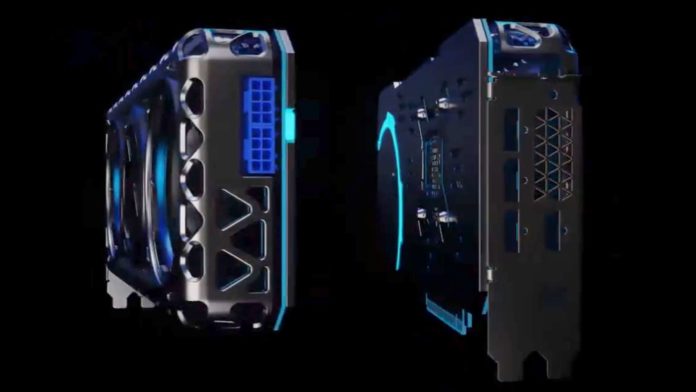 According to the latest round of rumors from Intel China, the company will be integrating hardware level real-time raytracing support into its 2nd Gen Xe graphics card lineup. In a video shared on Weibo (China), one of the heatsink designs were shown off. These are the same ones we saw during Computex, earlier this year.

The cards can be seen in all their glory with a metal built and blue LEDs. Seems like Intel is going to adopt this design for the second-gen Xe lineup scheduled for launch in 2021. These GPUs will leverage Intel’s upcoming 7nm node and considering NVIDIA and AMD both will be supporting ray-tracing on a hardware level by then, it’s only fair that Intel es the same.

A while back Intel had teased that its Data Center graphics cards will be supporting real-time ray-tracing on a native level but that was a very low-profile claim. Not to say that this is an official announcement, but one of the biggest GPU wars are about to take place next week, so it’s the perfect time for Intel to remind gamers that if team red or green don’t satisfy them, they’ve got another option.

I believe it would be fair to say that ray-tracing has successfully taken off. The race ignited by NVIDIA’s Turing RTX GPUs will be carried on by the next-gen consoles (Xbox Scarlett and PS5). AMD is also going to support the technology in its next-gen Navi lineup (RDNA+) in 2020 and has already made it clear in its roadmap. Lest to say that ray-tracing is set to become a standard in the next couple of years, and we’ll soon be seeing way-prettier games.