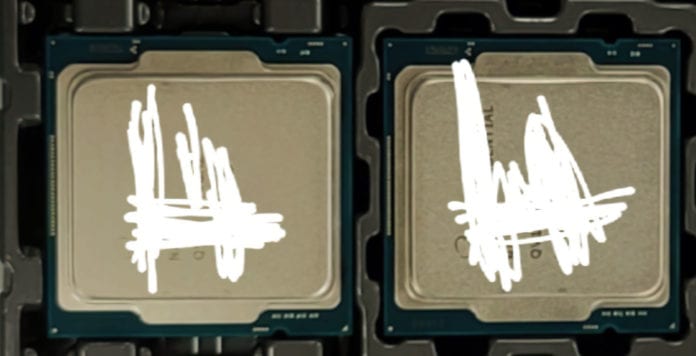 The 11th Generation of Intel desktop CPUs won’t see the official light of day until early 2021, but some leaks can still get us the scoop on the upcoming hardware. A user named Yuuki_AnS on Chinese video-sharing site Bilibili posted what allegedly is an upcoming 11th Generation Rocket Lake CPUs, presumably the i9-11900K.

The upcoming CPUs from Intel will be utilising the same LGA 1200 socket that we saw on the 10th Generation chips that released earlier in 2020, making compatibility with existing 400-series motherboards possible. There will be 500-series boards coming as well, which will also have PCIe 4.0 support. These CPUs will be a move away from the Skylake microarchitecture that has been present on multiple predecessors of Rocket Lake-S, instead featuring the Cypress Cove architecture backported on the Intel 14nm++ process that shall be used once again by Intel for these CPUs. Engineering Samples of the upcoming CPUs would likely already be made available to PC part manufacturers for their testing, evaluation and planning, so this leak could be of one such sample.

CapFrameX, the (account of) gaming performance testing and logging software, in a series of unverified tweets, mentions that an Engineering Sample unit has managed to hit 5.6 GHz on a single core with Intel’s Turbo Boost 4.0 Technology, an unprecedented number for Intel CPUs of recent past. This may indicate impressive gains for Intel CPUs in use-cases such as gaming, all meaning that AMD’s Zen 3 will face stiff competition right after launching and (seemingly) outperforming Intel’s 10th Generation chips.

The new core means that we cannot speculate based on the trends of the previous Skylake iterations how well the new generation will perform, but these leads look incredibly promising, and we will have to wait for more such rumours to understand how much competition the CPU market will be seeing in the near future.

Even 12th Generation Can Be Talked About!

Intel has already revealed their plans for the future past their 11th Generation, and Alder Lake, the planned evolution to the 12th Generation, is also supposed to be manufactured on the 10 nm architecture. What else we have also seen, albeit not from Intel but from reliable sources and leakers, are pictures of a CPU on Alder Lake. The pictured CPU is not a square, but a rectangle with what looks like more pins than before. The CPU is thus not utilising the LGA1200 socket, but a new LGA1700 socket instead.

Alder Lake is expected to be a departure from how Intel usually designs their CPU core layout. It is expected to use two different kinds of cores, with “Cove” being a higher-performance core, and “Atom” being more efficient. This indeed is very similar to ARM’s big.LITTLE core design that we have seen in many smartphone CPUs. These two different cores will be different in design and perhaps even microarchitecture, but we do not have any specifics of those details yet. Nonetheless, the next year seems to be promising for Intel, after a bit of a lull in their desktop CPU lineup for a few years.