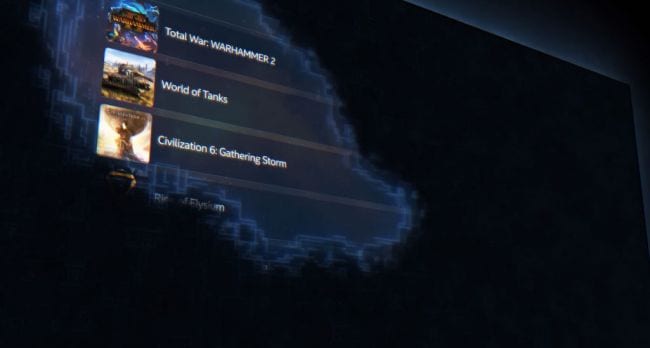 Veteran chipmaker Intel, which is almost synonymous with semiconductor chips and one of the oldest corporations in the Silicon Valley, has recently released a teaser of its new IGP control panel. Intel has long been subdued by Nvidia and AMD, who currently are the forerunners of making graphics chipsets for PCs. Intel’s integrated graphics have been far inferior in terms of performance. However, with the release of this video on its Twitter handles, Intel has managed to scoop out a slice of anticipation.

The 14-second clip has far too less content to deduce any major giveaways, with an ulterior motive of stirring the pot of leaks and rumours. It is pretty much evident that a modern interface, albeit similar to the one offered in Steam. Nevertheless, it poses some stiff competition to the ageing Nvidia GeForce control panel. The major upgrade is definitely in the visual aspect, with Intel giving larger buttons and toggles to use. Intel has already introduced an “optimised” settings, based on hardware. The gameplay website provides the user with the optimal settings to play certain games which abide by the processing and graphics capabilities. The user interface of the panel is going to streamline the usage.

The panel is set to release later this month, with the fact that Intel used the hashtag #JoinTheOdyssey. The Odyssey name associated with Intel is strongly rumoured to be the codename of its first discrete GPU. “The Odyssey is built around a passionate community, focused on improving graphics and visual computing for everyone, from gamers to content creators. And we want voices like yours to help guide us,” said Intel. Nevertheless, the anticipation has been facilitated, and all eyes would be on Intel at the upcoming Game Developers Conference (GDC) in March 2019. “I’m excited about the upcoming control panel for Intel graphics. It’s designed for the lower power PC gamer on the go, it’s instructional for those new to performance tuning, and we’re planning a beta program so you can help us make it even better,” said Chris Hook, the marketing boss of the Graphics Division in January.

Hook’s entry into Intel made headway as he became the first discrete graphics marketing employee, a move coming almost a year after Raja Koduri, Chief Architect at AMD departed to join the Team Blue. It made pretty clear that the company is going to make its presence known in the dedicated GPU arena. Hook noted on Facebook that, “Intel will be growing its technology portfolio across computing, graphics, media, imaging and machine intelligence for clients and data centers, AI, and edge computing,” when he joined from AMD.