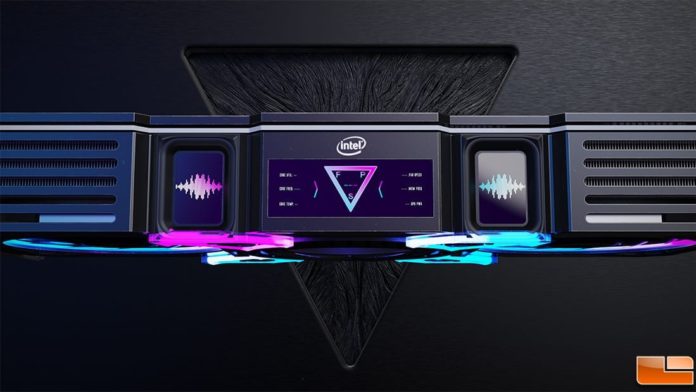 Intel is planning to enter the discrete graphics card market next year with the first generation of Xe GPUs based on the 10nm architecture. However, the company is setting its expectations sky high, with concept designs of futuristic graphics cards that were demoed at Computex today. We’re talking as far into the future as CD Projekt Red’s Cyberpunk 2077, but in fact a decade later, that is 2035. These concept designs have been cooked up by popular artist Cristiano Siqueira, who is also responsible for the company’s earlier heatsink models.

Think from a different galaxy, way more advanced than us. But, not the one from Mass Effect that BioWare designed which was nothing short of disappointing. We’re looking at a sleek water block without any fans attached to the graphics board, and of , you’ve got them LEDs for…um, well, bragging rights I guess.

The Gemini graphics card design from Intel has a very Deus Sexy look. A metal frame, with what appear to be modded blower style fans. This build won’t do much for the thermals but hey who cares, it looks sweet.

AMD’s new RDNA has Been Exclusively Designed for Gamers

Sirius looks similar to Andromeda, with a , but the design is somewhat different. You’ve got a glass top above an LED which refracts/reflects the light, giving it a premium look.

This one is my favorite. The looks and even the name Prometheus have a very Matrix-y vibe. However, compared to the other designs this one is simpler. You are looking at LED-studded dual fans on top, with more lighting thrown in between, because why not. On the side, you’ve got a small screen displaying the various GPU stats like temps, clocks and memory usage (HOF and a few super-expensive enthusiast cards have already incorporated this feature if you’re interested). The back plate is relatively less flashy with a metal built and of course some more LED stripes.