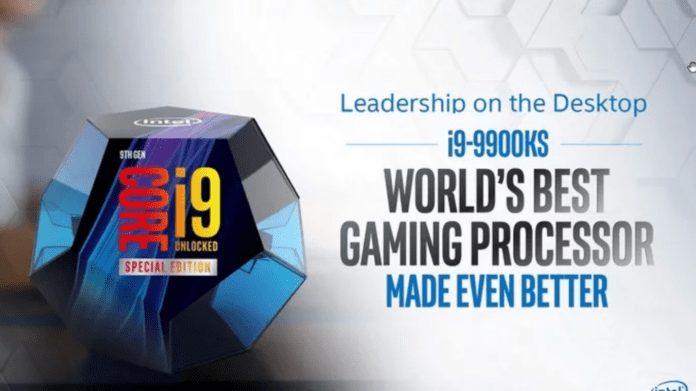 The IFA 2019 will be underway at Berlin from tomorrow where Intel is expected to show off more of their 10th Gen Ice Lake and Comet Lake lineups pertaining to Project Athena based devices from Acer, Asus, Lenovo, MSI, and Razer. Perhaps the more exciting news, however, is the announcement of an official release date for Intel’s much-awaited Core i9-9900KS which is being binned to run at 5GHz default, across all cores.

Intel demoed Hitman 2, a fairly CPU heavy game, running on the Core i9-9900KS and an NVIDIA RTX 2080Ti. The Core i9 was being cooled by a 240mm AIO Corsair cooler and not some exotic cooling of any sort.

Intel also made an announcement of their upcoming HEDT lineup of CPUs dubbed Cascade Lake-X (CL-X). Intel is promising to offer more than twice the performance per dollar compared to their previous, rather disappointing HEDT platform, Skylake-X (SL-X). Here, it must be noted that Intel is comparing CL-X with last-gen Threadripper built on the Zen+ architecture.3rd gen 32 core Threadripper rumored Sharkstooth will be based on the much improved Zen 2 design and is reportedly 20% faster than the 2990WX. Assuming AMD keeps Threadripper prices unaltered, we can simply multiply 20% on top of the values on the chart above. Upon doing so, we find that the 2950X, the best value Threadripper CPU, gets a score of 1.932xand is directly in the vicinity of Intel’s CL-X. This certainly suggests that the HEDT market could get very competitive in the upcoming months