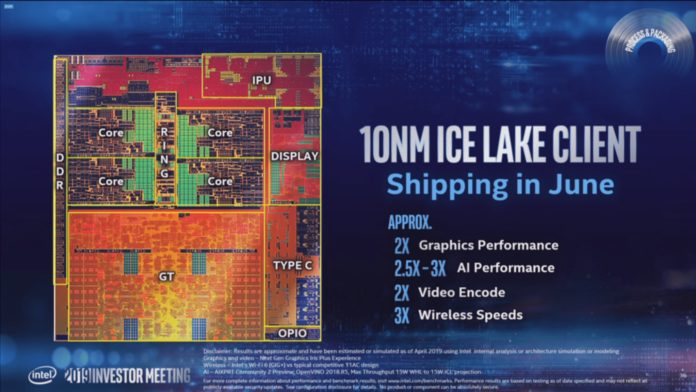 The Icelake U mobile chips are going to be the first 10nm based processors from Intel. The company’s been stuck on the 14nm node ever since the reign of former CEO Brian Krzanich (that’s almost 4 years). The 10nm Icelake-U parts are expected to arrive in the third quarter of 2019 (with a possible Computex reveal). As the release date draws closer, we’re seeing more and more leaks pertaining to the 10th Gen Intel CPU lineup. Today, prominent Twitter leaker, TUM-APISAK has shared the GPU score of an Icelake chip. The part is going to feature team blue’s supercharged Gen11 iGPU developed by Raja Koduri and Co. over at the new Visual and Graphics Technologies division of Intel.

Looking at the specs, one thing becomes immediately clear, i.e, this is a low power (15W) product but regardless packs 40CUs and scores 70.61GFLOPS in the SiSoft GPU test. In comparison, most of the Coffee Lake-U iGPUs in this performance range consume 25-30W of power. This can only be a Gen11 part (with 320SPs and 40CUs) and it seems like the 10nm will certainly be quite efficient. We’ll update this story if something else pops up.

The SiSoft score and the specs for the accompanying Icelake-U CPU have also been shared, but for some the database mentions it as a single core/single thread part which is quite unlikely. Especially if you consider the 6MB of L3 cache and 512kB L2 which is common in quad-core Intel chips. Furthermore, like the GPU, the CPU is also clocked quite low @ 1GHz with this particular sample overclocked to 1.19GHz. There’s however, no mention of the boost clock. This appears to be power, 15W Icelake processor with four cores (8 threads?) and a turbo clock of 2-3GHz. Keep in mind that this is mere speculation on my part and the actual specs might vary drastically.