Marvel studios has had a great run, from putting forward the first Iron Man without a complete script to producing multiple movies a year, well planned in advance. In the years following this, the studio in the wake of Avengers’ success, started to try out some bizarre ideas, taking big leaps of faith, with 2014’s Guardians of the Galaxy being the first of them.

When it came out, virtually no one had any idea about its characters, story or setting in any way, except for maybe the hardcore comic book fans. This caught the audience by surprise as the above mentioned factors charmed them and made us fall in love with them. People all over the world wanted more of Star Lord, Gamora, Drax, Rocket, and most of all Groot. This is where the sequel comes in.

Guardians of the Galaxy Vol. 2, directed by James Gunn, continues the cosmic adventures of the team into new heights. The film starts off in a similar manner as the first one, with a prologue, and with the credits accompanying yet another dance number, bigger in scale of course. Picking up a few months after the first one, our heroes seem to have bonded well, with a better team dynamic when it comes to fighting their way out of a situation when needed, and with a team like this, they tend to invite such scenarios.

The film deals with Peter Quill’s (played by Chris Pratt) mysterious parentage and offers some much needed answers to the questions left at the end of the first film. Changing the character’s comic book origins, it is revealed that Ego (played by Kurt Russel) is his father. While this may seem like a spoiler, it really isn’t as this reveal occurs fairly early on in the movie and is the focus of the plot here. 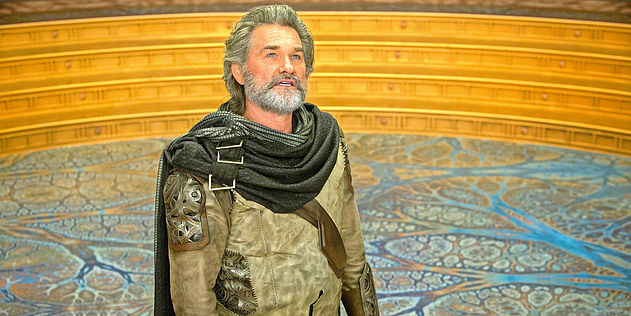 Ego is introduced as a very richly detailed character of vast importance to the larger Marvel universe. Being a celestial, he has survived millions of years, gathering knowledge from thousands of worlds and can be seen as one of the most powerful beings in the universe. Kurt Russel portrays the Living Planet in the most perfect manner possible, and his chemistry with Chris Pratt is amazing. Providing some much needed backstory for our protagonist, which expands upon the mystery set up in the previous installment.

The movie takes a point from Empire Strikes Back by splitting up the guardians around the end of the first act, giving some much needed space for character development. Although this does seem to interfere with the flow of action, fret not as we are given a much better understanding of the characters this time. Each major player has their intentions well established so that their actions make sense. Seeing as how the Guardians as a collective property are not as well known to the general audience as the Avengers, this is a welcome move.

As expected, our usual team of misfits give us just what we loved about them in the last movie, but what the film manages to add are the newcomers, or rather characters who are a much bigger part of the story than they were the last time. These include Yondu, Nebula and the latest addition of Mantis. Yondu (played by Michael Rooker) is without a doubt the stand out here. Not only do we get a better sense of what makes his connection to Star-Lord so strong, we also get small glimpses of how his life used to be before he picked up little Quill off of Earth. 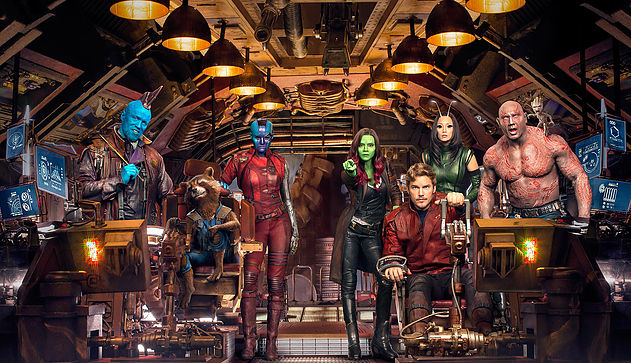 Nebula, being relegated to the villain’s henchman in the last film, more than makes up for it with a lot of character development. Her hatred for Gamora is given a valid reason and also paints a very frightening picture of what the Mad Titan Thanos’ parentage must have been like. Mantis however, feels like the weakest of the bunch. Although she has some pretty amazing abilities, her backstory is pretty much left out and as a result comes off a bit hollow.

As for Rocket and Groot, their relationship also has changed with a breath of fresh air. Rocket is still the stubborn little Racoon that everyone liked last time, but it is Baby Groot who will win over the most sceptical of audiences. He is simply adorable, and presents ample opportunities for the script to make fun of. And the best part about this is that despite what people may assume, he does not hinder the team’s efforts in the action sequences in any way.

Coming to the direction and production design, it is fair to say that it has topped the previous film in every way possible. Adding to that is the very vibrant color palette that shines in every shot. This is a gorgeous looking movie, which is amplified even further by the 3D. For each scene that lacks depth in storytelling, the production design makes up for it. This cosmic side of the universe looks and feel believable enough so as to invest ourselves in it. The Awesome Mix Tape Vol. 2 also gets an honorable mention, without which the film wouldn’t be nearly as joyful as it is. James Gunn’s choice of music for the sequel is definitely a highlight, just as it was in the original. 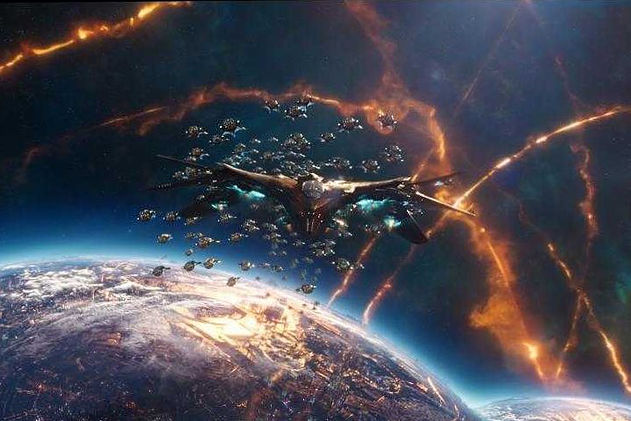 Marvel movies have had one long standing problem from the start, that is the lack of memorable villains (aside from Loki of course). Fortunately, this film fills the gap in providing a much better antagonist that the previous installments in the larger series. We won’t be mentioning any more of that considering that part of the story is a massive spoiler, but rest assured, here we get an antagonist that will be remembered as a well executed one.

The film isn’t without its problems though. The first half of the film suffers from a small dose of poor editing choices, and so the action doesn’t flow as nicely as it did in the first one. And then comes the humor. While the film manages to deliver a lot of laughs which are genuine and can be written about in another article itself, sometimes some of the jokes don’t land as hard as they are supposed to. This is mainly due to the tonal inconsistencies, as Marvel has yet to solve that problem. It’s not bad to include humor in a movie, only that it should be done so at a right time and place, and never at the sake of a larger moment. Some of the jokes manage to distract the audience from the larger action happening, and this seems to lower the stakes of the scene by a large degree.

Do not leave your seats as there is plenty of material to be digested during the ending credits. Marvel has managed to up their game by adding a whopping 5 post credits tags, with some of them offering us a clue about where the franchise might be headed in the future. Look out for some rocky cameos as they play a very important role here.

On an ending note, Vol. 2 manages to live up to the first one in a truly spectacular way, and while it may not be as great as the first one, it does give us more to love about the team, and rightly so in time for next year’s mega event Avengers: Infinity War. We look forward to seeing the Guardians again, as we’re sure they’ll get us hooked on that feeling !

What are your thoughts on the sequel ? Do you think it lives up the last film or does it exceed those expectations ? Let us know in the comments below !

Previous articleOutlast 2 Review
Next articleThe Best RPGs of all time

What about laundry in space? Tide detergent is partnering with NASA to find a laundry solution to help keep astronauts’ clothes fresh in space. Find out how.

Poco today announced the much-awaited Poco F3 GT, successor to 2019's Poco F1. Like every other Poco smartphone, the F3 GT is also a...

Titanic discoverer Bob Ballard, a marine archaeologist, is creating a new class of deep-sea robots that will transform the search for lost shipwrecks.
Advertisment