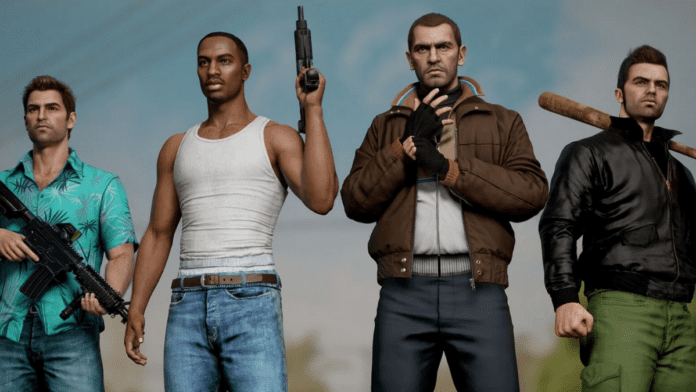 You might have heard something floating around in the gaming world about GTA Remastered. Well, I am here to compile all that rumour and innuendo into one place for you to take a look at. There’s more to it than you realise!

The original GTA 3D trilogy is some of the finest games ever made, period. GTA 3 damn near changed our entire worldview on games forever. GTA Vice City improved upon the foundation considerably and gave us one of the best atmospheres in any game ever made. GTA San Andreas might just be the best game ever made, which is an opinion shared by many.

Needless to say, these three games play a huge part in the golden age of gaming that some say we are going through right now. From innovating the fantastic 3D universes that we see in almost every game these days to creating compelling narratives that remain fresh for multiple playthroughs, a lot of what many people know about gaming now is because of these games. To think that all of this happened within a time frame of about five years sounds unreal.

When news started spreading about “GTA Remastered”, it’s no wonder our ears perked up. Surely, this would have been thought of sooner? What took them so long? All is well that ends well, and it looks like we are finally getting the fated 3D GTA Remastered games. Here’s why we think it might be happening.

It all began to kick off when Rockstar teased some surprises for GTA 3’s 20th anniversary, which falls on the 22nd of October of this year. The newswire post claimed “even more fun surprises to share” for people who play GTA Online and others. That could mean many different things and wouldn’t be as big of a deal without all these other details.

As most of us already know, Rockstar is a subsidiary of Take-Two studios, which first acquired DMA Designs (which was Rockstar Games’ original name) in 1998. In Take-Two’s Q1 FY2022 results, the company claimed to be remastering nine games in total, of which three are unnamed.

The reason fans are so excited for this particular development is that Take-Two has never denied that a GTA Remastered of the 3d Trilogy was something they wanted to do. They’ve previously claimed, “We don’t just port titles over, We actually take the time to do the very best job we can making the title different for the new release, for the new technology that we’re launching it on.”

That would indicate that if the GTA Remastered were to happen, it would undoubtedly be on the newest generation of consoles, alongside maybe even a new Rockstar Game Engine. There has been some speculation previously about the games in the GTA forums earlier this year. Still, this particular happening seems like the most substantial evidence in favour of the GTA Remastered Trilogy.

That’s not it, either. Known insider Yan2295 was asked about the games, and he had only one word to say about it- “Yes”. Now, if that only means that he thinks there’s going to be a GTA Remastered, or if he can only confirm their existence but not much more remains a matter of speculation.

The one personal opinion I have about this news is this- If the newest games are anything like the GTA San Andreas Remastered we got in 2015, Take-Two is better off not releasing the games at all. That “remaster” is the worst thing to ever come out with the name of Rockstar attached to it, and it is not even close. Since a Vice City Remastered and GTA 3 Remastered have never happened, we can only imagine how good or bad they can be. I highly doubt Take-Two would do the games that dirty, so fingers crossed.