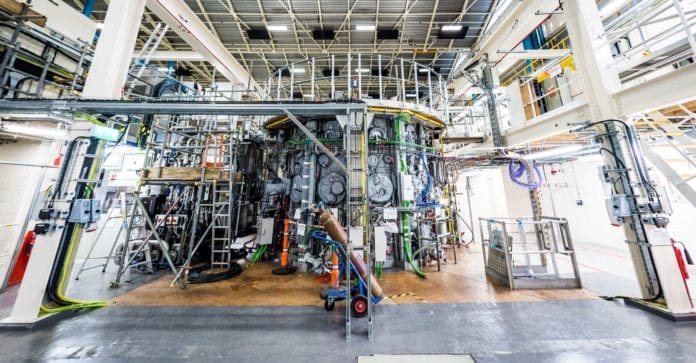 Nuclear fusion is considered to be the holy grail for our energy needs going into the future. This technology holds the promise of low-cost energy that is clean and accessible. However, it is also one of the toughest problems to crack from the perspective of engineering challenges. This has been made apparent by the global alliance formed to speedily build and operationalize a nuclear fusion reactor by the member states of ITER (International Thermonuclear Experimental Reactor). Against such odds, an experimental fusion reactor in the UK has achieved ‘first plasma.’

This is just another term for saying that the reactor has been powered on for the first time, and it has been confirmed that all its components can work together to bring hydrogen into its plasma phase of matter. The machine is called the MAST Upgrade; it is located in Culham, Oxfordshire, and is finally showing some results after the researchers have worked on it for seven years. The MAST Upgrade or (Mega Amp Spherical Tokamak) is the successor of a similar facility with the same name. This project holds immense potential for the UK as introduction of fusion energy into any country could potentially change everything.

Nuclear fusion is not a new concept. We have known that this process is the source of all the energy that we receive from the Sun. The reaction specifically involves the nuclei of two lighter elements, which fuse into a heavier nucleus and release energy. This process can happen inside the Sun because of the huge pressure that the mass of the Sun puts on its core. This pressure is a necessity when it comes to fusion. This has been one of the major hurdles in realizing these kinds of reactors, as creating pressure on that scale requires a lot of energy.

Previous tokamak reactors employed a doughnut-shaped configuration that housed the reaction chamber. However, newer generation tokamaks like the MAST Upgrade have a spherical one. It is expected to provide numerous benefits when it comes to efficiency and performance. This does not mean that there are no more challenges. The heat exhaust in such reactors is a big problem, and to address that, the MAST Upgrade will be testing a new kind of exhaust system known as the ‘Super-X divertor.’ If it is successful, it could reduce the heat and power loads by up to 10 times.

The MAST Upgrade itself is a trial run for a bigger project called the Spherical Tokamak for Energy Production (STEP). The MAST Upgrade will help us learn more about the performance and challenges of such designs and hopefully lead to accessible and reliable fusion energy.