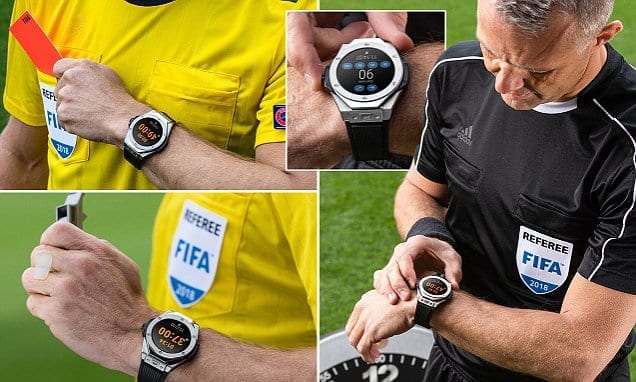 FIFA World Cup is just around the corner and will be kicking off in Russia from June. Hublot, being the official timekeeping sponsor of the 2018 FIFA World Cup has developed a special edition watch specifically for the tournament.

The watch is named “The Big Bang Referee 2018 FIFA World Cup Russia” (yes, that’s the actual name), and will run the Wear OS (Android Wear). The watch is going to be worn by all the referees during the tournament and will be used to determine whether it’s a goal or not using the Goal-Line technology to which it’ll be interfaced.

It’s not a cheap watch by any means and will retail for about $5200 US. Since it’s a limited edition, it’s production is capped to 2,018 pieces.

The Big Bang Referee 2018 FIFA World Cup Russia (they didn’t even try with the naming) is a very well-equipped watch. It runs the Wear OS (Android Wear) and uses Intel Atom Z34XX processor. Other specifications include a 35.4mm watch face, a 400×400 AMOLED screen, 512MB of RAM, a 410mAh battery, NFC, GPS, Bluetooth 4.1, 802.11n Wi-Fi and most of the usual sensors (accelerometer, gyroscope, tilt detector). As per Hublot, the 410mAh battery is expected to last around one day on a single charge. Water Resistance is till 5 ATM, or 50m deep.

Hublot has added a number of World Cup themed software too. The watch will display a countdown to the World Cup till the tournament actually start after about 2 months. Once the tournament starts you will get notifications of match start times along with live match stats. And the watch will also vibrate and will show the word “GOAL” whenever a goal is scored.

Although the technical specs are quite great for a smartwatch, they alone don’t justify the hefty price tag of $5,200. The major selling points of any Hublot watch are the design and the rarity. The Big Bang Referee 2018 FIFA World Cup Russia has a stocky 13.9mm-thick case and the bezel are both titanium with a satin finish. It also has a Kevlar insert, and just like most of the Hublot watches, the watch face has 6 H-shaped screws. There are two ‘One Click’ straps included : a sponge cuff strap with the 2018 World Cup and Hublot logos and a black rubber strap. Hublot is also expected to include an additional third leather strap in the colours of each customer’s country.

A version of this watch was already tested by some referees during some of FIFA competitions in 2017, so hopefully all the technology aspects have been tested thoroughly.

It’s always nice to see luxury meet technology and Hublot’s plunge in the smart watch market is a very good sign for the future of luxury smart watches.

The FIFA World Cup starts with the opening match between Russia and Saudi Arabia to played on 14 June.