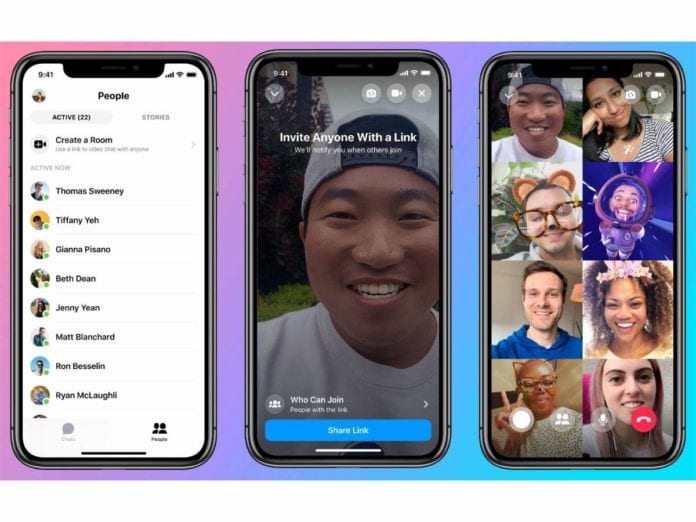 The sharp spike in demand and usage of video chat services during the pandemic has been evident. It is essential for social networking services to roll out new features to enable seamless video conferencing. Messenger Rooms introduced by Facebook will give stiff competition to Zoom, which has become a seemingly popular video conferencing app lately. Google Meet and Microsoft Teams are other recently launched alternatives for those of us who intend to keep in touch with friends and family during the pandemic.

Messenger chat rooms support video calls with up to 50 participants without any time limit and one necessarily does not need to have a Facebook account to join a video conference. Chat rooms can be created on both Facebook and Messenger app post which they can share the links enabling anybody to join the video conference.

“You can start and share rooms on Facebook through News Feed, Groups and Events, so it’s easy for you to drop by whenever you want. You can choose who can see and join your room or remove people from your room and lock the room if you don’t want anyone else to join,” Stan Chudnovsky the Vice President of Messenger, said in a statement.

Messenger chat room will also come with a shortcut that will be made available on WhatsApp Web, users would be able to initiate video calling from Instagram direct messaging too. This wide presence of chat rooms integrated with various social networking applications will help this feature to scale better. Through this integration, Messenger chat rooms will be accessible both on PCs and laptops.

This new chat room by Facebook, however, comes without the screen sharing feature which could potentially be a drawback. Zoom and other video chat conferencing applications provide users with that and enterprises, schools and colleges are heavily reliant on it. Zoom, however, faced considerable scaling issues in terms of being Not Safe For Work, which the application is trying to fix with updates.

Facebook has also tried to include some fun social features like filters and 360-degree virtual backgrounds making Messenger chat rooms more of a casual video calling application. Facebook has said that regarding the confidentiality of the chat rooms, neither the audio nor the video of the video chats shall be used for advertising purposes.

End-to-end encryption, however, does not seem to be present on the list of features offered. Globally, users will be able to create these chat rooms through the dedicated Messenger app, only for users in the US, this option remains available on the Facebook app itself.

Notably, Facebook also bought GIF-sharing service GIPHY, which will now be a part of the Instagram team.