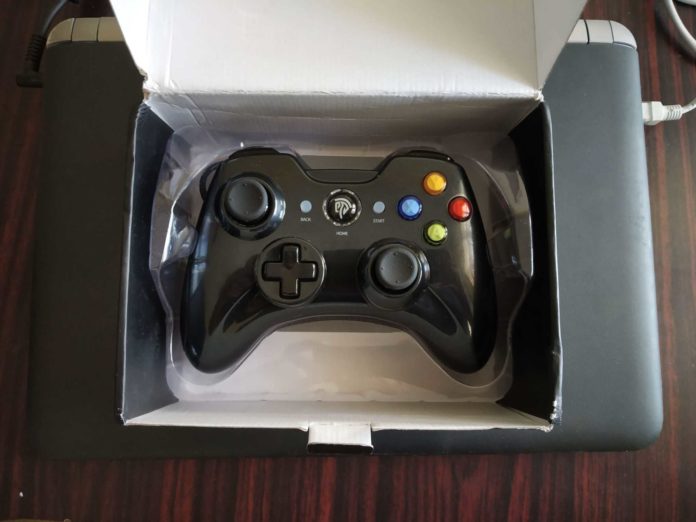 After reviewing EasySMX’s Wired Gaming Headsets a few months ago, I decided to review another product from the brand. One of the main reason behind testing another EasySMX product was how impressed I was by the quality that their headsets delivered at such a low price. This time, we’re reviewing the EasySMX KC-8236 2.4G Wireless Gaming Controller.

Finding the right controller for your PC is quite tough unless you’re willing to pay for the original PS or Xbox controllers, which can be a bit expensive. For someone like me, who don’t game that much and only need it for specific games like FIFA, buying an expensive controller doesn’t make sense. So, when I saw EasySMX’s wireless controller, I decided to give it a try and to be honest, I was surprised by this brand yet again.

Here’s what you get in the box:

First of all, I should complement the shipping and the packaging of the controller. The controller was received in a perfect state and there was no damage to the packaging. It’s something people don’t think about that much but can make a whole lot of difference since EasySMX ships its products worldwide and no one would want a damaged product delivered to their doorstep.

Right off the bat when you pick up the controller, you realize that this is not some cheap Chinese knockoff. The controller is neither too heavy nor light, it hits just the right spot when it comes to weight. The chassis is made of glossy black plastic and has quite a solid feel to it.

The button design and layout is the same as an Xbox Controller. There are controllers available with Playstation layout too, but I personally prefer the Xbox button layout. There are two clickable analog sticks, an eight-way D-pad, four trigger buttons, 4 action buttons (A, B, X, Y) and Back, Start and Home buttons. The side edges of the controller are rubberized and provide great grip. The whole design and shape of the controller is compact and felt secure in my hands.

Pressing the central button with EasySMX’s logo turns on the controller, there are 4 blue LED indicators that surrounds this button. The LEDs are used to indicate the different states the controller is in. The USB dongle is quite bigger than what you find on most of the other controllers. However, it compensates the bigger size with its 10m (32.8ft) range, which is quite impressive. I tested it from outside the room my PC is in with a wall in between and it worked perfectly fine. There’s no compartment in the controller itself to hold the dongle and it should be carried and stored separately, so the receiver being a bit bigger could be a blessing in disguise as it reduces the chances of losing it.

This controller comes with a rechargeable in-built 550mAh Li-polymer battery. The battery performance of this controller can be described in a single word, Amazing. It promises around 8 hours of operation on a mere 2-hour charge and it delivers just that. It can be used in a plugged-in state too.

Coming to the gaming performance, the controller performs quite well and exceeds expectations in this regard too. I have used many controllers in this price range from brands like Logitech, Red Gear, Cosmic Byte and this by far is the best one I’ve used. I tested it on a mix of new and old games like FIFA, Assassins Creed, A Way Out, Need for Speed, The Amazing Spiderman, LA Noire, etc. I didn’t try any FPS because I strongly believe controllers aren’t made for that. The gaming on this controller was consistently good throughout each game it was tested on. The analog sticks are extremely responsive and have just the right amount of resistance, not too stiff and not too free. They are comfortable to use and using the controller for a long time shouldn’t be a problem. The action buttons feel solid to touch and are sufficiently responsive. Coming to the 4 trigger buttons, the placement is almost identical to an Xbox controller and the buttons are easy to use.

The dual-vibration motors perform quite well and provide similar feedback as you’d expect from an original Xbox controller.

It can even be used on your Android devices. I tried it out on my Android phone and played a bit of Asphalt and it worked like a charm. I did not experience a lag of any sort.

I’ll be honest, there’s not a lot about this controller that can be written in this section. It’s a performer and for the price it retails at, there’s nothing more you can ask for. I still tried my level best to test its every aspect and find something that can be called as a demerit or a cost-cutting measure and here are a few things I found.

To start off, I believe the glossy plastic on this controller, although is of great quality, can be replaced by a much premium looking matte finish plastic. This will make the controller look much better. Now, this is more of an opinion, than a fact.

There’s also something in this controller that makes a clicking sound whenever it is moved. I don’t know what that is, maybe the wobbly action buttons or something loose inside the chassis. The company should look at the design and find a way to eliminate this sound.

Another thing that I found is that both the clickable analog sticks are a bit hard to click. Even if you click it, it doesn’t stay in that position easily, unless you apply a lot of force. It makes some of the controls in the games quite tough to use.

Finally, the USB receiver is one of the biggest I’ve seen on any controller, it does deliver great range but I’ve seen controllers with the same range but smaller dongles. Another thing that can be improved in the design is the provision for storing the dongle within the controller.

Although most of these are quite trivial issues and won’t affect the majority of users, I believe that if a company is competing against much more expensive controllers like the original PS and Xbox controllers or third-party controllers from huge brands like SteelSeries, Logitech, etc., Perfection is what they should strive for. Since these changes are trivial, it wouldn’t even affect the cost of the controller that much.

Now, this is the second product from EasySMX that I’m reviewing. I was impressed by the first product I reviewed and it obviously increased the expectations I had for this controller, and to be honest, it exceeded all my expectations. I have used many affordable controllers from different brands, and I was expecting a similar level of quality but this EasySMX wireless controller really just outperformed all of those controllers in the same price range.

Considering the price it’s available at, you just cannot go wrong. Just the fact that I’d rather compare this controller which costs less than $30 to original Xbox and PS controllers which sell for double the price instead of other affordable options should be a testament to the quality of this product. It’s compatible with PC, Android, and PS3, and it’s quite hard to find a controller with such compatibility at such price.

SteelSeries has a controller, Stratus Duo, costing $60, the Steam controller costs $50, the Logitech Wireless controller retails for around $52.99 while the original PS and Xbox also cost around $50-$60 and I can think of no extra feature other than just the brand name that would justify these prices.

So, to conclude, if you’re in the market for a gaming controller, and want a reliable, quality controller while saving a few bucks, you should seriously consider the EasySMX KC-8236 2.4G Wireless Gaming Controller, it surely won’t let you down.

You can buy this controller from :

DDR4 RAM Prices Decrease Even Further, Down by Up To 40 percent