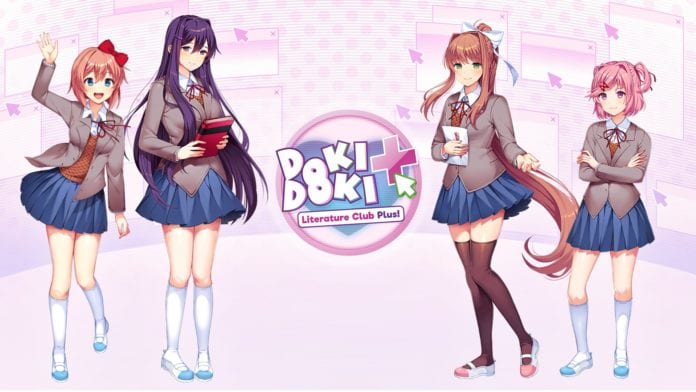 The game that took the world by storm in 2017, and still continues to have a rabid fan following in 2021 finally gets an expansion.

In a series of tweets made by the creator of Doki Doki Literature Club, Dan Salvato, the much-anticipated expansion was announced to be releasing on PC, Nintendo Switch, Playstation, and Xbox.

The game was announced to have new content in the form of Side Stories, which are stories of “Friendship and Literature” set in a timeline that’s separate from the original game. 6 Side Stories have been added, one for each pairing of characters.

Doki Doki Literature Club Plus also comes with a built-in music player, perfect for listening to the original DDLC tracks, and some new ones created by Varien.

The expansion introduces collectibles in the form of an Image Gallery, which displays more than a hundred images players can try and collect. This addition was introduced to encourage people to explore the game and its secrets more.

The most important thing out of all of them is that Doki Doki Literature Club Plus carries the full, base DDLC game as it was released in 2017. Everything that we loved about the game is still there, and the newer additions help expand the universe and mythology.

The Psychological Horror is what makes the game different from its contemporaries. DDLC isn’t “What you see is what you get”. Far from it, the game is much darker and manipulative than most can fathom.

The emotional beats it hits, the characters and how they interact and most of all, the surprise is what makes Doki Doki Literature Club the phenomenon that it is. That is also exactly why I love it.

How and Where to Buy Doki Doki Literature Club Plus

The Digital edition costs $15, while the physical edition can be bought through Serenity Forge, through pre-order and online delivery, for $30. Doki Doki Literature Plus releases June 30th.