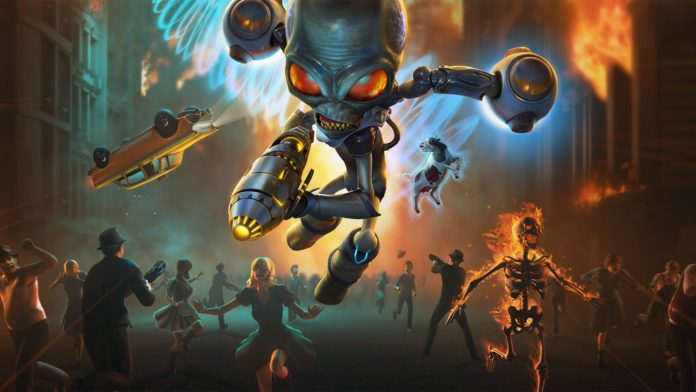 Get ready to terrorize earthlings this July! THQ Nordic and Black Forest Games have announced that their remake of the cult-classic, Destroy All Humans! will be releasing this July 28, 2020 on PC, PS4 and Xbox One.

Preorders are now live, along with special editions, of course. You can preorder the game on PC via Steam, or on Xbox One via Microsoft Store.

The Crypto-137 Edition, featuring a Crypto-137 figurine, a Crypto backpack, keychain, six lithographs, an anti-stress toy, and all in-game Crypto skins, will set you back $399.99.

Check out the new trailer of the Crypto-137 Edition:

Check out the new trailer of the DNA Edition:

About Destroy All Humans!

If you’ve ever wanted to become an alien in the 1950s who annihilates humans with an arsenal of alien weaponry and psychic abilities and destroys cities with his flying Saucer, then this is the game for you.

Destroy All Humans! allows you to explore idyllic US cities of the 1950s in the role of the evil alien Crypto-137, read the thoughts of their citizens to uncover their secret desires… and then burn the very same cities to the ground with the mighty Death Ray of your flying saucer!

Many games have taken inspiration from its mix of humoristic story-telling and easily accessible open world shooter action, as well as its wide range of over-the-top weaponry.

If you have a GTX 1050 Ti or better build, don’t worry, you’ll be able to satisfy all your desires of bringing doom to the planet. The minimum system requirements: