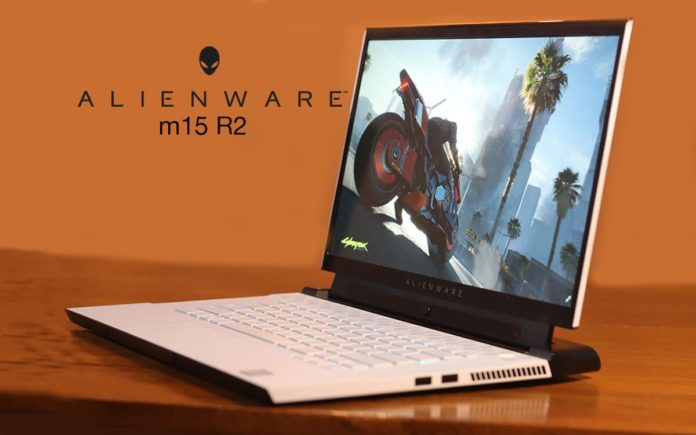 When Alienware launched its m15 gaming laptop last year, it was received pretty well, except for some minor problems. This year though, Dell has updated the laptop with newer specs, so is it enough to be the ultimate all-in-one laptop? We tested the Alienware m15 R2 for over a week, and the short answer is – It could be.
The Alienware m15 R2 unit that we have has the following specs:

If those specs sound impressive, it’s because they are. A 6-core CPU with an RTX 2070 Max-Q makes for a great combination for gaming. And the display is probably the best part of the entire laptop. But when you combine them together, that’s when problems start to arise.

But let’s not get ahead of ourselves. Coming back to the design:

This laptop has hands down the best keyboard I’ve ever used on a gaming laptop, which is built like a tank. The customizable RGB backlit keyboard is great to type on, so you can actually get some work done after that LAN party.

The chassis itself is well built (magnesium alloy), without any of that squeaking that you find on cheaper gaming laptops. You get 3 USB ports on the sides, a headphone jack, one HDMI port, 1 mini-display port, 1 thunderbolt 3.0 port, and an Alienware Graphics Amplifier Port. The last one is a port for Alienware’s own eGPU enclosure, so you can it instead of the Thunderbolt port for connecting a desktop GPU. It’s also decently heavy at 4.75lb (2.15 Kg).

The fans are on the side, which I like. Speaking of fans, they don’t get as loud as I expected, even with those beefy specs. But it’s useful though, as the laptop does get hot. The m15 R2 can get pretty warm while playing, with the hear reaching up across your fingers while they’re on the keyboard. It doesn’t get too hot, but if you’re used to playing on a desktop, it might bother you. The touchpad here is pretty good, coming with Windows Precision drivers.

But with the great display that it has, I’m sure you won’t even look down to check. The 4K OLED screen is heaven for a content creator. It’s color accurate, but the refresh rate does seem to limit for the hardware it’s packing. And that’s where I have some issues. You see, the m15 R2 comes with multiple display options – 1080p 240Hz, and two 4K 60HZ options.

Here are our benchmarks for all the games we tested:

As you can see, gaming at 4K 60fps? Nope, not unless you push settings down, and then again it’s not guaranteed. Now, I have to say that the Alienware command center was acting buggy on my unit (which has been a common issue for others also).

We turned the settings down and here’s the performance chart for 1080p:

Now, these are looking like good, playable framerates. The RTX 2070 Max-Q is almost akin to a desktop RTX 2060, so really it’s targeted towards 1080p gameplay. Far Cry 5 though had some weird problems, where the performance was much lower than expected. For comparison, my personal desktop has a Ryzen 7 3700X paired with an RTX 2060 Super, which is about 30% better than the mobile 2070. But when benchmarked, I get much better framerates. And it’s not like the i7-9750H is any slouch either.

The laptop scored 1382 in Cinebench R20, which is fairly respectable with its specs.

Let’s talk a bit about the special feature – Tobii Eye-tracking. Wow! It’s subtle, but it can help in a lot of games, especially 3rd person cover-based shooters. I tested the eye-tracking on Far Cry 5 and the performance was satisfactory. Other than that though, I really don’t think there’s much to the feature.

Where I really see the laptop shining is during video/photo editing. You’ve got the specs, a good display and an SSD for fast video ingest. But is the heavy-duty build worth it? That’s a question I’ll leave up to you.

In the end, the Alienware m15 R2 is a great gaming laptop, but some of its configuration options do seem confusing. I suggest going for the 1080p high-refresh-rate options, as you’ll get much better performance in that resolution.

You can buy the laptop directly from Dell here, or from Amazon here.