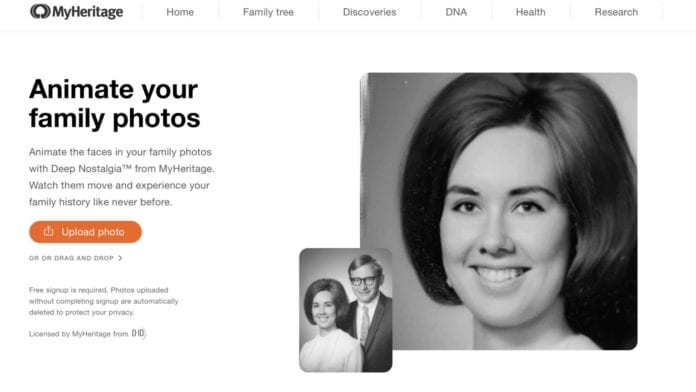 Yes, you read it right! A new AI tool can bring portraits of dead people to life. A genealogy company named MyHeritage recently launched a “deep nostalgia” feature. This feature enables users to transform a still picture into short videos of the person in the picture smiling, winking and nodding.

In a statement, the founder of MyHeritage Gilad Japhet said, “Seeing our beloved ancestors’ faces come to life lets us imagine how they might have been in reality, and provides a profound new way of connecting to our family history.” Deep nostalgia was developed in collaboration with an Israeli computer vision firm D-ID. It uses deep learning algorithms to animate images.

Some users of the company shared on Twitter the animated images of their deceased relatives, along with those of Albert Einstein and Queen Nefertiti.

Deep Nostalgia has received a mixed reaction from the public. The tool is the latest innovation that aims at bringing the dead back to life with the help of technology. Along with amazement, the feature also sparked some ethical and legal concerns, around consent and blurring reality by creating a virtual version of the living.

Elaine Kasket is a psychology professor at the University of Wolverhampton in Britain. She has also authored a book on the digital afterlife. According to her, Deep Nostalgia is not necessarily problematic, but it sits on top of a slippery slope. She said, “When people start overwriting history or sort of animating the past, you wonder where that ends up.”

MyHeritage acknowledges that their new feature is a bit uncanny. Their website says, “Some people love the Deep Nostalgia™ feature and consider it magical, while others find it creepy and dislike it. Indeed, the results can be controversial and it’s hard to stay indifferent to this technology. We invite you to create videos using this feature and share them on social media to see what your friends and family think. This feature is intended for nostalgic use, that is, to bring beloved ancestors back to life.”

It adds, “Our driver videos don’t include speech in order to prevent abuse of this, such as the creation of “deep fake” videos of living people. Please use this feature on your own historical photos and not on photos featuring living people without their permission.”

Faheem Hussain, a clinical assistant professor at Arizona State University’s School for the Future of Innovation in Society said that images by themselves can convey meaning. “Imagine somebody took a picture of the Last Supper and Judas is now winking at Mary Magdalene – what kind of implications that can have,” Hussain told the Thomson Reuters Foundation by phone.

He added that Artificial Intelligence animations can be used to make someone appear as though they are doing something, which they may not be happy about in real life. For example, rolling their eyes or smiling at a funeral etc.

MyHeritage public relations director Rafi Mendelsohn said that using pictures of a living person without their consent is a breach of the company’s terms and conditions. He also explained that the animated videos are marked with AI symbols to distinguish between them and authentic recordings. “It is our ethical responsibility to mark such synthetic videos clearly and differentiate them from real videos,” he said.