If anyone were to ask me to recommend an ‘intelligent anime’, Death Note would be my first choice. The original manga & anime took the world by storm when they first came out, proving that you don’t always need action to make a story interesting. The anime was so smart, it would probably garner the attention of Sherlock Holmes, if he were real. With so many twists and turns, it kept the audiences at the edge of their seats, wondering what would happen next. As is the case with popular anime such as this, it was inevitable that it would get the Hollywood treatment, eventually.

Historically speaking, the number of successful anime-turned-live-action-movies in the past could arguably be counted on one hand. There are certain elements one must consider when adapting something such as this, whose origins lie in the roots of it’s creator’s culture. Which is why when one thinks of films adapting such, movies like Dragon Ball: Evolution & The Last Airbender come to mind. Two terrible movies, based on two amazingly awesome anime. 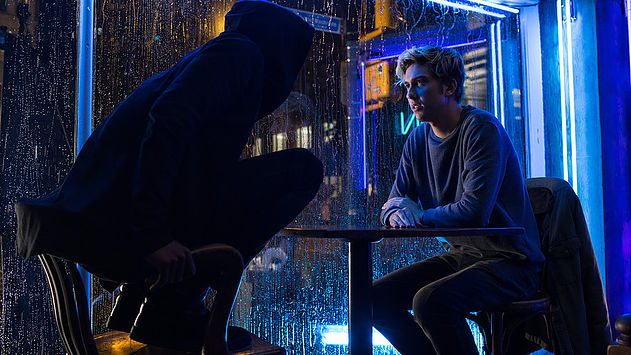 Death Note, directed by Adam Wingard, follows Light Turner, a 17 year old average high-school student whose life takes a turn for the worse (?) when a mysterious notebook falls from the sky. Opening the book, he finds there are numerous rules written inside, the main one being that whoever’s name is written in the note, that person shall die provided the other rules of the notebook are followed. Along with the note its owner, a dangerous god-like creature going by the name of Ryuk appears. Ryuk provides Light with details on how the notebook works, and while Light only believes the encounter as a product of his imagination, he quickly changes his mind when he sees the effect of the Death Note for real. 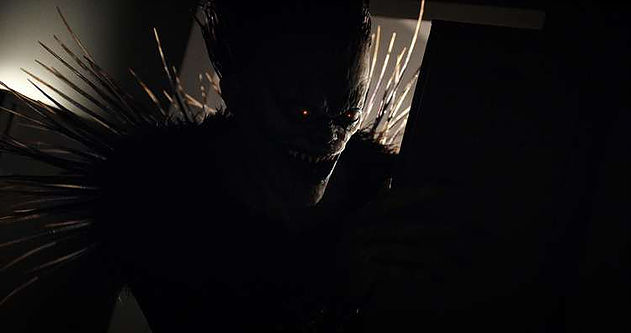 Seeing that the power of Death Note can make him a seeker of justice, he quickly takes it onto himself to rid the world of evil by entering the names of high profile criminals in the Death Note. Mia, a fellow classmate joins Light in his path of righteousness and together they decide to take justice into their own hands. It is here that the movie makes its first, and arguably most significant, mistake. In the anime, Light turning from the path of justice to a sociopath is a gradual one. In fact, it is at the core of Light’s character arc, as we get to see a well-intentioned person become an evil one. A perfect anti-hero, one whose ways are wrong but whom we still root for. That is one of the things that made the anime so amazing. Here, the process of Light turning into Kira (the persona he takes in front of media) is, for the lack of a better term, rushed. And that is what this whole movie feels like most of the time. The shorter run time definitely adds to that, so basically about 20 plus episodes’ worth of content is crammed in a little under 2 hours.

But surely some good must’ve come out of it right ? Well, yes. There are elements that try to pay homage to the anime, with Ryuk being the best. Willem Dafoe gives his absolute best as the death-god, and it shows. While the special effects used to bring the character to life are just fine, it is his intensity that brings the character to life. You really do feel intimidated whenever he’s on screen. Unfortunately he’s not there for most of it, and you really start to miss him since the other characters don’t really have the cinematic finesse to get you invested in them.

Speaking of which, let’s talk about the characters. There’s a lot to be said about Light (played by Nat Wolff). Being the lead protagonist, the amount of change that has been made to the character and his motivations in astounding. In the anime, Light Yagami is a genius. He has backup plans for his backup plans, and has clear, rational motivations for what he does & how he does it. However, in the movie, we get Light Turner (go figure), a sorta-kinda smart person who makes dumb choices. Twenty minutes into the film and he divulges the secret of the Death Note to his crush Mia. Yes, let that sink in. Not only have the character arcs for these characters been completely changed, they don’t make sense for the story the makers are trying to tell. 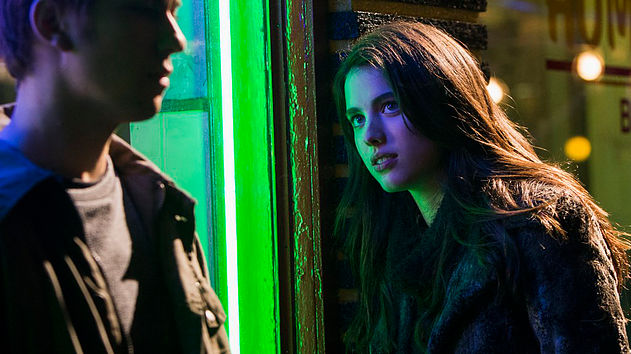 Coming to Mia (played by Margaret Qualley), she is a complete reversal when it comes to adaptation from the anime. While in the source material she is a fun character who pines for Light’s attention, here she appears to be an average teen-movie stereotype. We are never given any reason for why she joins Light in his killing spree, except for the fact that they both love each other. But even that plot point falls flat on its face as we aren’t given any genuine reason for it. It just kinda…happens. Her mindset however, is a different story. She is actually willing to go to any lengths to protect her and Light’s dream of ridding the world of evil, and presents a very shrewd view of the justice system, where the end justifies the means. This should’ve been the trait for Light’s character, one which would actually make him feel more powerful than he is presented as, but for the most part it works. It gives off a variety in how the death note is used for achieving the same goals.

L (played by Lakeith Stanfield) is perhaps the most accurate depiction of the character in the film, & I say that because everyone else is just too different in order to be compared with their manga counterparts. Being the weird but intelligent detective, L is a fun presence, one who gives Light something to fight against. While the casting decision for the character may have stirred up some controversy, Stanfield delivers his best. It is in the second half however that his character takes a hit. L is supposed to be a calm person, one who would not lose his temper even when the situation around him has gone haywire. While he manages to present himself in said manner for the most part, by the time the third act of the film rolls, he is reduced to a shadow of what the original character is supposed to be : Not acting on impulse. Seriously, we get a chase sequence involving him and Light. Something which would never have happened they gave the characters the right treatment. 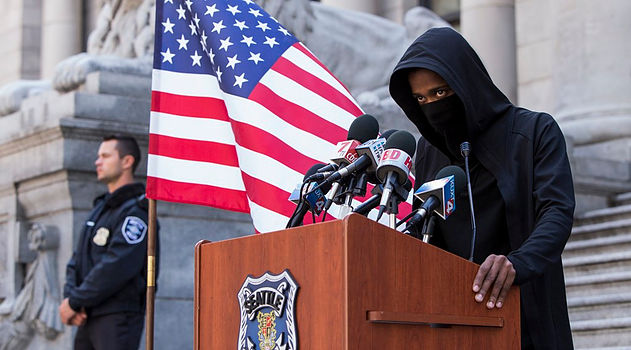 Now, coming from a person who’s a big fan of the anime, it would be safe to say that this movies is disappointing to say the least. But let’s take that out and what do we have ? How does Death Note stand as a movie ? The acting is fine, the special effects are fine. The editing is okay. The soundtrack ? Tad bit too experimental for a movie with a dark tone like this. And while we’re on the topic of the tone, Adam Wingard makes some weird choices here. You can tell he’s trying to inject some comedy in here but that mostly falls flat too. Whether that’s due to poor direction or bad acting it’s unclear, but it is clear that the unique tone that the film tries to operate in does not mix in well with what the premise has established. Add in the R-rated nature of violence and its pretty clear that either something went wrong in the editing room or the writers really thought it was a good idea to have awkward humour being thrown at the audience’s faces right after a gory decapitation scene.

All in all, Death Note serves as yet another example of what happens when anime is is experimented upon to be westernized. While it isn’t as terrible as the abomination that was Dragon Ball Evolution, it doesn’t even come close to the masterpiece that the anime was. Bar that, it isn’t even a competent film on its own, and that is why you should probably skip this one (unless you’re ready to not take it as seriously as it was supposed to be).