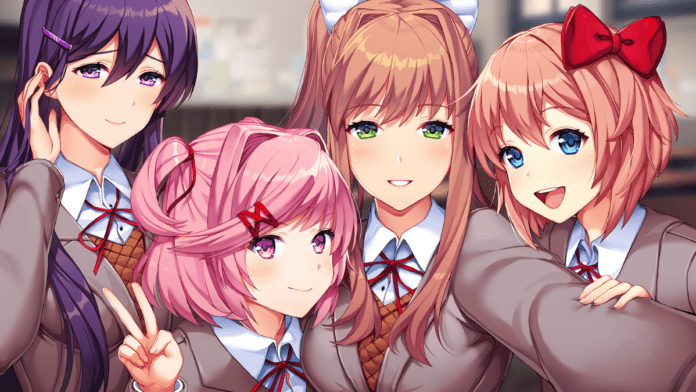 In this DDLC Plus Review, Let’s wander through the intricate and narrative-driven upgrade to the visual novel that took the world by storm in late 2017 and 2018.

When DDLC originally came out in 2017, the sole creator of the project Dan Salvato, never intended for the game to be as big as it did. For a good reason, as Doki Doki Literature Club is not a conventional game by any means.

First of all, you don’t play Doki Doki Literature Club as much as you experience it. There is barely enough “gameplay” to classify it as a game at all. In typical Visual Novel fashion, you get some input on a few dialogue choices and the general direction of where the story is headed. The game leads you through the rest of the way while you just read the words and watch the character expressions change.

Then there’s the terrifying Psychological Horror.

Since DDLC plus builds upon the original 2017 classic, in this DDLC Plus Review. We’ll first take a good look at the original game and a relatively spoiler-free review of the narrative.

DDLC is the type of game that rewards you for paying attention to its narrative yet still is enjoyable if you’re in the mood for some light reading and dumb fun. At least for the first half of the game, that is. It is also a game that rewards multiple playthroughs, and I discovered some secrets that I never found out back in 2017.

The characters are very well written, so well that I ended up relating in one way or another to all of them. Sayori, Yuri, Natsuki, and Monika are all fascinating characters filled to the brim with personalities that brighten up the room every time they enter it.

That is why it hurts even more when the game progresses, and we see them helplessly trying to fight against their demons, desperately searching for a way out. The player is also helpless, as the barebones control of a visual novel prevents him from doing anything. By extension, the power was taken from my hands, and I had to play as the game forced me to.

In a worse game that didn’t have as much nuance in its narrative, that would have been a major flaw. DDLC isn’t that game, though, and it is only enhanced by the risks it takes and how far it pushes the medium of the visual novel. DDLC plays with the player’s expectations and prior knowledge of a visual novel and excels in almost every department.

When you open DDLC, you get a content warning telling you that the game is unsuitable for children or the easily scared. The first thought anyone has while reading that is- “Why does this cutesy little anime game have a mature content warning?” Even after those warnings, the game manages to lull the player into a false sense of security.

Then all of their innocence is ripped apart brutally as they have trouble sleeping at night and contemplate their entire life choices. Hey, if it works, it works! The narrative of DDLC is phenomenal, and the only complaint most people had with it was that there wasn’t enough of it. Well, DDLC plus is here to take care of that issue!

DDLC Plus Review- What it brings to the table

Doki Doki Literature Club Plus had everything served to it in a golden platter- it had the fantastic narrative and characters of the original DDLC and the fanbase’s support behind it. All it had to do was not disturb the base game and deliver some new content related to and as good as the base game. As this DDLC Plus Review will show you, it did all of that and more.

DDLC Plus adds new content in the form of a new meta-narrative that sees a government-backed agency trying to experiment with the original game to investigate and influence the game’s events. It also adds Side-Stories, extra content showing the player how the eponymous Literature Club came to be.

It is in those Side-Stories that the game shines the most, as the characters we have all come to love to interact with each other. They also teach each other about how to improve themselves and their relationships with themselves and their other friends. We, as players, also find some solace and direction from their problems and learn to look at life in a slightly different way.

We also learn how the characters went about creating the club and the various social dynamics that already existed before the events of the base game. Not all of those Side-Stories are great, but all of them are at least good, and a few are absolute masterpieces of visual novel storytelling.

The only flaw that I found with DDLC Plus was that some Side-Stories are a little too wordy and might not resonate with people who don’t like the characters as much as I did. That, and the virtual machine style launcher, robs the game of some of its original vibe, a vibe of you being able to mess with a weird game to make it even weirder. The new presentation is still very intriguing, and I look forward to watching the 37 videos MatPat makes on it.

DDLC Plus Review- Art and Music

It is impossible to talk about Doki Doki Literature Club and not talk about its breathtaking music and phenomenal character art. The new music composed by Nikki Kaelar is just as good as the original soundtrack and suits the vibe of Side-Stories to a tee. The art, though simple, is still fantastic and well-drawn.

In DDLC Plus, it has been made even easier to listen to your favourite tracks, as well as look at your favourite art pieces from the entire game. All the poems that you collect are also neatly displayed in a separate section for one to peruse and find out hidden meanings.

Doki Doki Literature Club Plus is an absolute masterclass in storytelling and subverting expectations. The plot is fascinating, the characters are incredible, the music is stunning, and Natsuki is the best girl. It is truly the love letter to visual novels that Dan Salvato set out to make.

Get DDLC Plus for the Nintendo Switch, PS4, Xbox One, and PC from Steam and Epic Store.