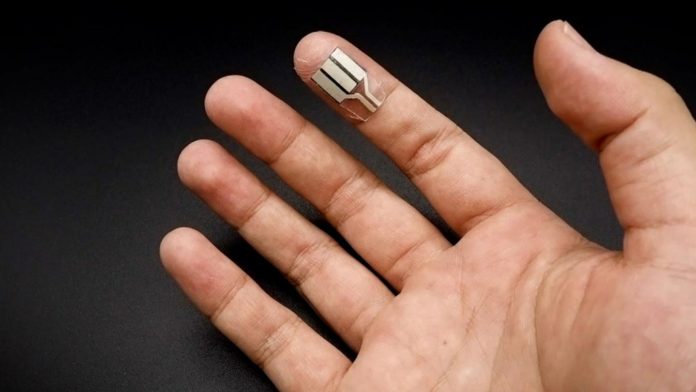 Researchers have created a device to collect energy from your sweaty fingertips and generate power efficiently. The extremely thin and flexible strip wraps around the tip of a finger and generates small amounts of electricity. Since fingers constantly produce sweat, the thin strip acts as a Band-Aid and converts chemicals found in the sweat into electrical energy.

Each finger pad is a one-centimetre square and composed of flexible foam that contains a hydrogel which provides maximum sweat absorption. The process starts when the sweat from your fingers touch the strip, which then automatically collect energy from your sweaty fingertips. You can also generate extra power by pressing it or by applying slight pressure while doing mundane tasks like typing on your computer, texting, or while playing a musical instrument. The electrical energy generated is then stored in a small capacitor that can later be discharged to charge low-powered devices.

“By using the sweat on the fingertip — which flows out naturally regardless of where you are or what you’re doing — this technology provides a net gain in energy with no effort from the user,” said Joseph Wang, co-author and a professor of nanoengineering at UC San Diego.

The device to collect energy from your sweaty fingertips was originally built to be highly absorbent. Firstly, the sweat from our fingertips gets absorbed, which then gets converted into energy by a padding of carbon foam electrodes. The electrodes contain enzymes that trigger chemical reactions between lactate and oxygen molecules present in sweat, thereby creating electricity. It also contains a chip underneath the electrodes made of piezoelectric material that generates more energy on pressing.

Why collect energy from your sweaty fingertips?

Questions are often asked about why one would want to collect energy from your sweaty fingertips and not any other body part? Well, believe it or not, our fingertips are packed with more than a thousand sweat glands, which can furnish between 100 to 1,000 times more sweat than any other part of the body. Factually, our fingertips host the highest concentration of sweat glands in the human body – much more than our armpits, or backs.

In reality, it is not easy to notice how sweaty they are since most of the sweat typically evaporates from the fingertips as soon as it comes out. This new device built by scientists collects it before it vanishes.

“Generating more sweat at the fingers probably evolved to help us better grip things,” says Lu Yin, a nanoengineering PhD student working on the device. “Sweat rates on the finger can reach as high as a few microliters per square centimeter per minute. This is significant compared to other locations on the body, where sweat rates are maybe two or three orders of magnitude smaller,” he further added.

The device has been curated with the inclusion of a biofuel cell powered by the lactates that dissolve in our sweat. According to engineers at the University of California San Diego, biofuel has the potential to power a number of wearable electronics. Similar technology was used in the University of Tokyo’s sustainable smart-watch battery which made headlines a while ago this year.

“Our goal is to make this a practical device,” Yin said. “We want to show that this is not just another cool thing that can generate a small amount of energy and then that’s it. We can actually use the energy to power useful electronics such as sensors and displays.”

Developing a device to collect energy from your sweaty fingertips has been one of the many breakthroughs by their dedicated wearable electronics research department and the team is now set on incorporating their discovery into physical wearable forms like gloves. “There’s a lot of exciting potentials,” says senior author Joseph Wang. “We have ten fingers to play with.” The authors wish to advance the device’s efficiency and durability by combining it with other types of energy harvesters. More studies have been planned on the same, so to continue the quest of creating new self-powered wearable systems in the future.