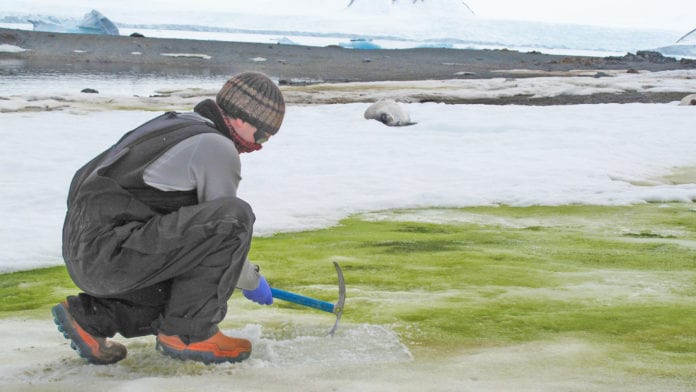 Scientists have designed the first-ever large-scale map of microscopic algae on the Antarctic peninsula. Referred to as the ‘green snow’, they bloom across the surface of the melting snow. They leave a green tint on the surface, creating a host of nutrition for other species as well. This algal bloom is likely to spread with the rising temperature globally.

The British team involved researchers from the University of Cambridge and the British Antarctic Survey. Dr Matt Davey from the University of Cambridge’s Department of Plant Sciences led the study. According to him, “This is a significant advance in our understanding of land-based life on Antarctica, and how it might change in the coming years as the climate warms”. He explained how snow algae are an integral part of the continent’s capability to seize carbon dioxide from the atmosphere with the help of photosynthesis. Watch below how the algae are turning snow green which might create a new ecosystem.

Biologists spent six years detecting and measuring the green snow algae. They used a combination of satellite imagery and ground observations to detect the present extent of green algae in the world’s most depleted continent.

Although each individual alga is microscopic in size, in some areas the single-cell organisms are very dense. The algal bloom turns the snow bright green and is visible from space. The study is published in the journal ‘Nature Communications’. Blooms of green snow algae are found around the Antarctic coastline, the majority of which is found in the north of the Peninsula and the South Shetland Islands. In the past century, the Peninsula has experienced a rapid increase in temperature.

The team found that marine birds and animals greatly influence the allocation of green snow algal bloom. For instance, they found that around 60% of algae blooms were within the vicinity (about five kilometres) of a penguin colony. It is because the birds’ excrement serves as an excellent fertilizer. The algae also form close bonds with tiny fungal spores and bacteria.

Around two-thirds of the green algae bloom on small and shallow ground. As the Antarctic Peninsula warms, they may lose their summer snow cover and find it covered with snow algae instead. Scientists have previously observed a similar change in lichen and moss, but they grow much slower compared to algae.

Mosses and lichens together comprise the two biggest salient groups of photosynthesising organisms. Photosynthesis is the process in which plants and algae bring about their own energy. It requires the help of sunlight, carbon dioxide from the atmosphere and releases oxygen in the process.

Often considered devoid of plant life, Antarctica is now home to several types of algae, which thrive on snow and suck CO2 from the air. Dave described the algae map as the broken thread of the carbon cycle jigsaw in the Antarctic. He along with his team found out that algae on the peninsula at present absorb levels of CO2 parallel to 875,000 average car journeys. Antarctica is not just about snow and penguins contrary to what people think. As a matter of fact, there is a lot of plant life when you look around.

On comparing to other parts of the planet, these polar regions are warming far faster than ever. They estimate that low-lying coastal areas of Antarctica would be algae free as soon as they experience snow-free summers. But it contradicts with the predominance of large algal blooms with the increase in temperature each day. Also, the snow at higher altitudes is softening at an alarming rate.

The world’s southernmost continent, Antarctica is typically known as a frosted land of snow and ice. This new study portrays how microscopic algae can play a significant role in Antarctica’s ecosystem and carbon cycling. Overall, they expect a suitable habitat and more carbon sequestration.