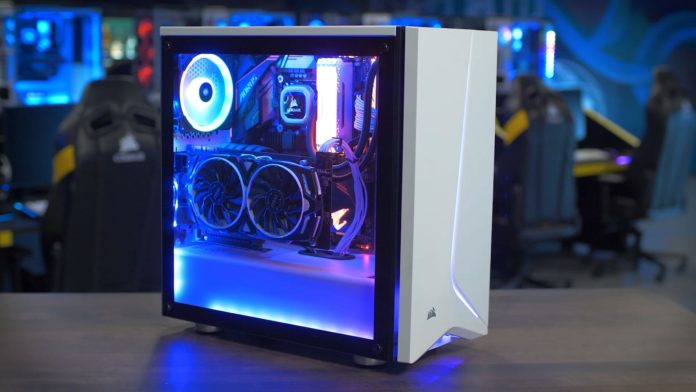 We have been posting Gaming PC Build for the past few months. Since we have received several requests for Video-Editing PC Builds, this build is dedicated to them. Keep in mind that while this PC can play games easily, a gaming-focused PC will be better suited to the task. While the primary focus for gaming is the GPU, we will focus on the CPU and the Storage for an editing PC. Here are some tips to keep in mind:

The AMD Ryzen 7 3700X is one of the best-valued CPUs around for pure performance. While there’s not much of a difference between the 3700X and the 3600X in gaming workloads, the extra cores make all the difference in multi-threaded loads. As mentioned before, the more the number of cores, the better the editing performance. It also has a lower rated TDP than the 3600X at only 65W. While it is hard to recommend the 3900X for the price, you can get the 3700X without a second thought. Second only to the Ryzen 9 in sheer processing power, at almost half the price, the Ryzen 7 is a no-brainer. It also comes included with a Wraith Prism Cooler.

Recommended Motherboard: ASUS TUF B450 Plus

The ASUS TUF B450 Plus is an excellent option under 10K that doesn’t skip out on features. With a great VRM setup that supports overclocking, substantial I/O and support for up to 64GB of DDR4 RAM, there aren’t any compromises. Moreover, it has a sublime cooling solution and even sports RGB.

While a Graphics Card isn’t essential for a video-editing PC build, it does help in rendering and encoding tasks. Since ray-tracing doesn’t matter in editing, dishing out extra for an RTX GPU doesn’t make sense. That said, a GeForce GTX 1660 is a great option to pair with the build as modern editing software does take advantage of a dedicated GPU. If you are a bit short on cash, you can also opt for a more budget centric graphics card. It won’t have an unbearable impact on the performance of your editing rig.

The G.SKILL Sniper X is a dual-channel 16GB memory kit that comes in at a rated speed of 3000MHz. We chose a 2×8 GB kit as it offers the best performance when paired with the Ryzen processors. It also includes the industry-leading G.SKILL lifetime warranty and is one of the most competitive memory kits around.

Since you don’t need to overclock your GPU for editing, you can opt for the Corsair CX450. It will be more than sufficient for your build and also comes included with a 5-year manufacturer warranty. It does well enough while keeping the fan noise on the quieter side.

The SPEC-05 is one of the most spacious mid-tower cases on the market and offers great thermal performance with reduced noise levels. While there’s a slight compromise on the acrylic panels instead of tempered glass, space for up to 5 fans and support for multiple options certainly makes up for it. The SPEC-05 is a simple, easy-to-build-in PC case and offers a great value for the price.

For Video Editing, you need to store your project files, software, source footage as well as the cache. While ideally, you should be storing everything onto an SSD, 4K footage can take up space really fast on your PC. Personally, I would recommend using an SSD for your OS and the Software while a fast HDD for storing your footage.

Since this is a budget build and we haven’t opted for an X570 board, and the PCIe 3.0 based Crucial P1 1TB NVMe PCIe 3.0 SSD. PCIe 4.0 SSDs still cost north of the 20K, and the benefits of one aren’t that apparent just yet. The Crucial P1 offers 1 TB of space and a blistering write speed of 1700 MB/s. For a budget editing PC, that’s more than enough.

Summing up all the components, the total comes up to Rs. 78,070. You can use the leftover cash to get a Hard Drive to supplement your storage and store video footage. Stay tuned for more video-editing builds or check out our other PC Builds.