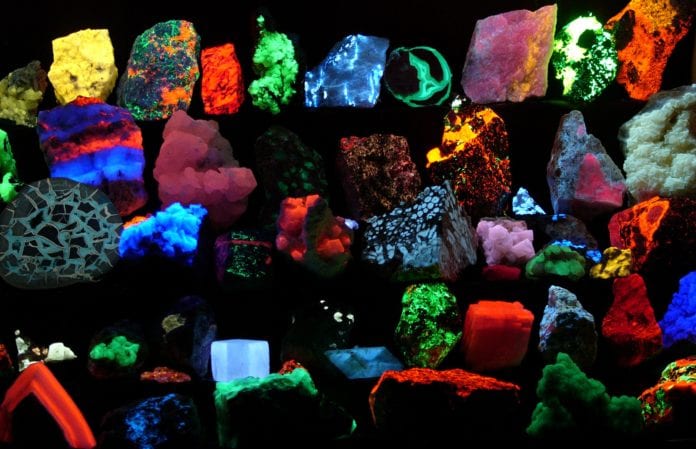 Recently, a team of scientists in the US and Denmark created the brightest fluorescent materials ever known and the first of its kind. By overcoming some highly technical roadblocks, researchers were able to create these bright fluorescent materials and reported their findings in the journal Chem on August 6th, 2020.

What are fluorescent materials?

The main hurdle for them was maintaining the distance of the molecules in the solid. There are more than 1,00,000 fluorescent dyes that glow when they are in a liquid form. Maintaining the brightness of the colours is much trickier in solids. None of them can be mixed and matched to create solid optical materials.

“The problem of quenching and inter-dye coupling emerges when the dyes stand shoulder-to-shoulder inside solids,” says study author Amar Flood, a chemist at Indiana University. “They cannot help but ‘touch’ each other. Like young children sitting at storytime, they interfere with each other and stop behaving as individuals.”

It means that the molecules of fluorescent dyes or liquids — or fluorophores — are separated by other chemicals called solvents, whereas in solid form, they pack too close together and interfere with each other.

Also Read: New Sun To Be Made On Earth In A Brilliant Experiment

Professor Flood and his colleagues believe that they have found a solution to the problem and thus, were able to create these bright fluorescent materials. By formulating positively charged fluorescent dyes into a new class of materials called small-molecule ionic isolation lattices (SMILES), a compound’s flashing glow can be effortlessly transferred to a solid, crystalline state.

Professor Flood and his co-authors used a doughnut-shaped molecule known as a cyanostar to separate positively-charged (cationic) fluorescent dye molecules and their anions. The negatively-charged anion sits inside the hollow of the cyanostar and the fluorescent cation rests outside.

In this way, the cations and anions are stacked charge upon the charge in a chequerboard lattice (called SMILES). This is similar to what you would see in a crystal lattice of sodium chloride (known as common salt). This helps in keeping the dye molecules apart, when the solution solidifies. In turn, these lattices can be grown into crystals, turned into dry powders, spun onto thin films, and even directly integrated into a synthetic substance called a polymer.

“These materials have potential applications in any technology that needs bright fluorescence or calls for designing optical properties, including solar energy harvesting, bioimaging, and lasers,” says Flood.

Fundamental Understanding Still To Be Developed

As these bright fluorescent materials are still in their infancy, scientists do not know which of their innate properties are actually going to offer superior functionality. Further research will be conducted to discover more about the same.

“We also do not know the materials’ limits. So, we will develop a fundamental understanding of how they work, providing a robust set of design rules for making new properties. This is critical for putting these materials into the hands of others – we want to pursue crowdsourcing and to work with others in this effort,” says Flood.