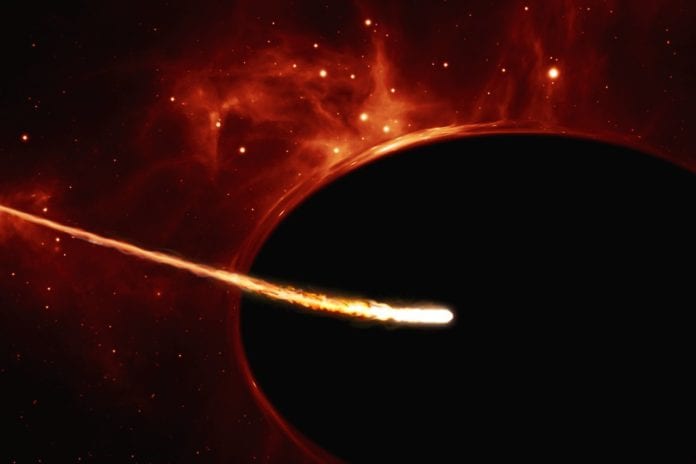 A Black Hole is already terrifying as a concept. The idea of an inescapable well of gravity sucking everything in is something right out of our darkest nightmares. Despite this, the public imagination seems utterly inspired by these anomalous entities. For researchers, the reason for this enchantment is entirely different. The extreme behavior of a Black Holes allows scientists to see the limits of our understanding of the physical Universe and test our theories and hypotheses. If an idea can withstand the extreme test of a Black Hole, it is probably right.

While trying to study these anomalous entities researchers have discovered a Supermassive Black Hole that has six galaxies trapped in its gravitational well. The SMBH seems to have caught those galaxies in its clutches soon after the Big Bang. The new research holds some important information that could potentially help us better understand how the evolution of these celestial bodies plays out. There are some speculations as to where these early Black Holes come from. The most plausible explanation seems that they must have formed from the collapse of the first stars. The newly discovered one, however, is an SMBH. It is not an ordinary Black Hole.

The researchers are also trying to unravel how the SMBHs, such as the one at the center of our Galaxy, evolved from its early stages. The researchers think that enough gas is trapped in the galaxies to feed these Black Holes and grow them to the Super Massive scale. These gases are clustered in filaments that are trapping the cluster of these galaxies in the new discovery. The filaments serve the dual purpose by feeding the growth of the galaxies themselves and the SMBH. This is the first probable explanation for the existence of such early black holes.

The new research also helps add to the credibility of the idea that the early gaseous structures in the Universe have formed with the help of Dark Matter. It is the only probable source that can attract such huge amounts of gas. The current hypothesis states that these structures are formed inside halos of dark matter. The researchers, enabled by the recent advances in our detection capabilities, will probably detect more such gargantuan structures. The mere scale of this cluster of Galaxies is incomprehensible for humans. The entire web is about 300 times the size of the Milky Way Galaxy.

The work of the researchers has only just begun; they suspect that these galaxies are the ones that are the brightest, and there might be fainter galaxies that have not been detected around the Black Hole. Further investigation could lead to some startling results.