Bitcoins and Cryptocurrency: What is it and how does it work?

Cryptocurrency is fast becoming a popular topic of discussion all over the world. Due to the constant advances in technology thanks to bouts of innovation, we now have a new way to view almost anything that exists – and this includes money. This article is meant to explain what cryptocurrency is, how it works, the potential pitfalls it may encounter, as well as the benefits it has.

Cryptocurrency is a way of encrypting transfer of digital money from one person to another. An important note here is that it works on a person to person basis. There is no intermediate platform that facilitates transfer of money. Cryptocurrency works on the basis of using encryption to secure transactions for added anonymity. Satoshi Nakamoto is the name that was used by the person or organization that introduced it in 2009 on a worldwide scale with the invention of bitcoin. Now there are over a thousand crypt-currency specifications that exist today, all derived from bitcoin. As a result of this, the article will focus mostly on bitcoins.

Bitcoin is virtual banking currency that can be transferred from one person to another via the Internet. It behaves just like real world money and has a conversion rate just like any other form of currency. Each person stores their amount in a digital wallet, which is a database that can be stored on a computer hard drive, smartphone, tablet, or even somewhere in the cloud software phones use. 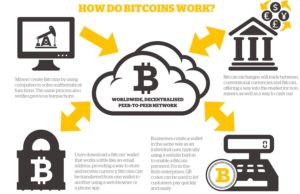 One of the main advantages of bitcoins is that it is decentralized and all the transactions that happen using the currency are recorded. What makes bitcoins so popular is the fact that it provides a certain degree of anonymity and secrecy. Even though the transaction data is available to everyone, who’s making the transactions is never revealed. Furthermore, accounts using bitcoin cannot be frozen.

All that is fine, but how do bitcoins really work?

Bitcoins are essentially money that can be passed from one person to another. But how does this process happen? Well, in simple terms, one person enters the amount of money and that amount gets taken out of their bitcoin wallet and deposited in the recipient’s wallet. When this transaction is made, it is recorded into a public ledger and stored as data. These transactions form ‘blocks’ and the blocks get bigger and bigger as more and more transactions happen throughout the world. Whenever a transaction occurs, a message is sent to the bitcoin network (I’ll get into this later) that details your account and the amount that you’ve changed it by. Each of these messages requires a signature in order to verify that the account owner is the one who actually sent the money. However, it is unique in that the signature is based off math (an encryption) rather than on handwriting. Each owner has a key, and this key is used to create the message. The decryption process serves as the test as to the identity of the person who sent the money. This makes sure that unauthorized transactions do not affect the ledger and essentially make sure that no thievery of any kind occurs. 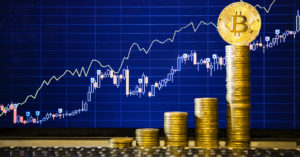 As for who maintains the ledger, the answer is surprisingly simple. Anyone who wants to.

Bitcoin’s system is made in such a way to make each block harder to find than the last, which in turn reduced the amount of bitcoins that are generated and distributed to miners. As the number of individual bitcoins grows, the amounts of bitcoins rewarded have diminished. Whole bitcoins are no longer generated and instead minders are rewarded with fractions of bitcoins. This may not seem like much, but remember that as of this article, the value of 1 bitcoin is a whopping $9700 (which is about Rs. 6,2,6,280), so even fractions are still pretty valuable. However, this presents a problem as sometimes the costs outweigh the benefits and as such, it might not be the best incentive to start mining in the first place. 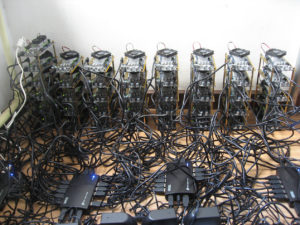 One point to note though is that their value fluctuates in a very sporadic manner. On November 29th, the value of one bitcoin was estimated to be about $11,000, which is the result of a steady rise ever since 2016, when it was valued at around $1000 or $2000. Since then it has gone through a huge amount of ups and downs, which has raised questions about how safe it is to invest in them. Furthermore, it is not recognized all around the world just yet. Why the value of it is still so high is a result of scarcity of bitcoins themselves plus how popular it has become in places where it is widely used. If, for whatever reason, the market’s does not hold as much value in the future, the entire system could crash and burn. An example of this is if a major government declares the usage of bitcoins to be illegal, or if a large bitcoin exchange was hacked and therefore loses its value. The value of the currency itself will nosedive and huge losses will be unavoidable. There isn’t any protection either, and due to this, there is a lot of black market appeal. No user can inherently be blocked out of the system and combined with anonymity; it can lead to exchanges for illegal purposes.

Despite all this, one cannot deny that bitcoins are an up and coming form of currency that will soon be accessible by everyone across the world. They completely bypass banks and other third parties and their transactions are irreversible, not to mention there is no central governing body or transaction fees (for now, at least). It is a fascinating development and one that has taken the world by storm, only growing popular by the day. The day where bitcoins replace regular cash may not be so far off into the future, but it still has a ways to go before it can get there. 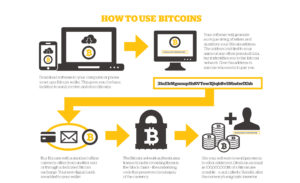 The people who maintain the ledger are called ‘miners’ and the process is called ‘mining.’ The concept of mining answers two key questions: where bitcoins come from, and how bitcoins are regulated. Miners are responsible for checking the validity of transactions that occur throughout the world. They collect the transactions and they form a bundle called a ‘block’. At this point, the transactions are turned into a mathematical puzzle, and in order to generate the bitcoins, this puzzle has to be solved. Solving the puzzle generates bitcoins and validates the transaction. It should be noted, however, that the puzzles in question are fairly complex, having 64 digit solutions, and there is no shortcut or secret method to solve them. The puzzles build on previous answers, and the only way to stay ahead of the other miners who are solving is to use more computers, which in turn, uses more electricity. This is how the income of bitcoins is balanced out. As time went on, however, the problems became too difficult and complex for one person to solve individually. This is where pooled mining comes in. Miners have developed a way to work together in pools in order to maximize their efforts and solve more of the problems that are presented to them, and they are rewarded in proportion to the amount of work they provide.

The power duo was announced at Apple's 'Unleashed' event. M1 Pro and M1 Max Specifications The M1 Pro and the M1 Max come in with...

The system requirements for the upcoming Marvel's Guardians of the Galaxy game have been listed on its Steam page. It seems like, just like Marvel's Avengers, some...