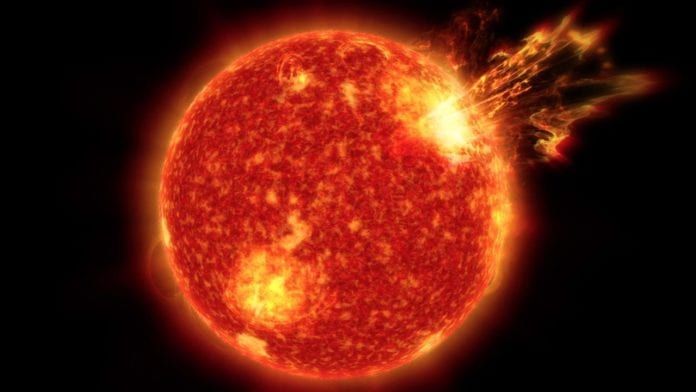 The centre of our planetary system and the source of all energy on Earth, our gigantic Sun, recently erupted with the biggest solar flare seen since 2017, which surprised scientists and even resulted in a brief radio blackout on Earth. The flare exploded on July 3, from a sunspot called AR2838 and was captured by NASA’s Solar Dynamics Observatory. This solar flare has been touted as the biggest solar flare since 2017 and it occurred over the star’s northwestern limb, appearing and disappearing quickly.

The solar flare’s effects were felt on Earth as the blast of x-rays travelled toward earth at the speed of light. As reported by the US Space Weather Prediction Center (SWPC), which tracks solar activity like flares and solar storms, the flare collided with the top of our atmosphere and caused shortwave radio blackout over the Atlantic ocean and its nearby coastal regions. The explosion led to a surge of electrical currents in the ground, a deflection of local magnetic fields, all of which resulted in an ionospheric disturbance.

The sunspot AR2838 burst through the surface of the sun unleashing what is being called the biggest solar flare in four years. The sunspot is now gone and will move towards the other side of the Sun in two weeks’ time. The explosion has officially been categorized as an X1.5-class explosion that marks the beginning of the Sun’s new solar cycle. It appears like the Sun is finally up from its slumber.

The biggest solar flare that erupted recently has been classified as an X-1.5 class sun event, the most powerful class of flares, which is responsible for the most extreme geomagnetic storms. They are the biggest and hold the capability of triggering radio blackouts. The number that follows with X-class gives information about its strength. For example, X2 is twice as strong as X1 and so on.

According to reliable records of solar activity, our Sun has a natural 11-year cycle of solar activity, measured from minimum (the least activity) to maximum (the most active) that involves sunspots, flares, and solar storms. It again goes back to being minimum and the cycle continues. Researchers claimed that the solar flare wouldn’t reach peak activity until 2025, so scientists were a little surprised by the sudden explosion of the X-class flare.

The recent eruption marks the beginning of a new solar cycle. This explosion was the first X-class solar flare detected of Solar Cycle 25, the 25th since. It means that our Sun is starting to wake up from its quiet period and we’re headed towards a solar maximum. According to spaceweather.com, if the sunspot is able to hold together it will come back towards Earth’s point of view in late July.

How strong was the biggest solar flare?

A solar flare is a sudden, rapid and intense explosion on the Sun’s surface which happens due to the release of massive amounts of energy stored in its magnetic fields. They are like giant explosions bursting through sunspots on the surface of the Sun, giving out powerful radiation.

The explosion emits radiation across the length and breadth of the universe, which directly affects the planets in our solar system. These radiations comprise radio waves, x-rays, and gamma rays and the energy emitted is equivalent to millions of nuclear bombs detonating at the same time. The flares are the solar system’s largest explosive events and can be seen as illuminating bright spots on the sun. Generally, there are three stages of solar flare each of which can be as short as a few seconds or could extend up to hours.

According to NASA, the solar flare is an energetic burst of radiation coming from the release of the magnetic energy contained within the sunspots. It led to the ionization of the Earth’s atmosphere’s topmost layer, which prompted the currents to flow in between 60-100 kilometres above Earth’s surface. As a result, the Earth’s polar magnetic field was altered. This explosion was the biggest solar flare blast causing cosmic fireworks, since 2017.

NASA claims that the energy released by the biggest solar flare could be equivalent to millions of 100-megaton hydrogen bombs exploding at the same time. However, it constitutes just one-tenth of the Sun’s total energy emitted every second.

Luckily, harmful radiation from the biggest solar flare couldn’t penetrate the Earth’s atmosphere – however, if strong enough, it can affect human technology such as satellites for GPS and communication in the Earth’s atmosphere. It also might cause harm to astronauts residing in the International Space Station by messing with power grids on the Earth.