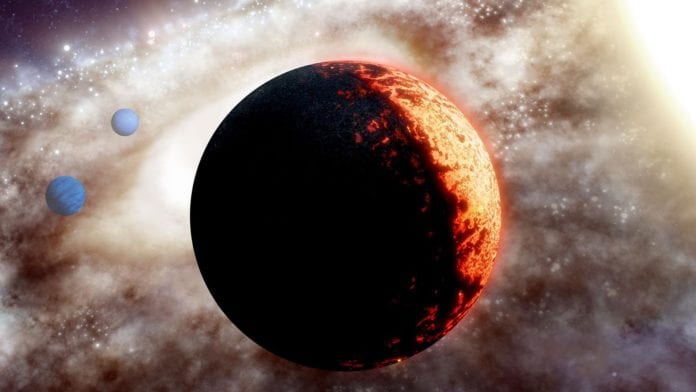 Astronomers are constantly peering through different instruments out towards the Universe. In hopes of unraveling the biggest mysteries known to us, they have searched, found, and cataloged many planets till now. A lot of them are special in one way or another. However, some are more special than others. Astronomers have found a hot and rocky exoplanet known as a super-Earth. What’s even more interesting is that it has been discovered orbiting one of the oldest stars in our Milky Way galaxy. The recently published study estimates that it is about 50% larger than Earth.

The bigger size combined with the three times mass of Earth has led the astronomers to label it as a Super-Earth. The planet is located outside our Solar System hence the tag of “exoplanet.” The celestial body is named TOI-561b and takes about 12 hours to complete one orbit around its host star. The exoplanet is exceedingly close to its host star, because of which the temperature on its surface is about 2,000 Kelvin. The new study has been approved for publication in The Astronomical Journal and was presented at the 237th meeting of the American Astronomical Society.

The researchers were able to discover this exoplanet thanks to NASA’s planet-hunting TESS. The satellite’s job is to survey the sky and observe the nearby stars regularly to determine whether planets are orbiting them or not. The satellite found TOI-561bin, in the thick galactic disk of the Milky Way. The stars in this rare population have fewer heavy elements. One of the surprising things about this exoplanet is that despite its greater mass, it has the same density as Earth. This points to the fact that the exoplanet is old as there were not as many heavy elements present in the Universe when these planets formed.

This comfortably puts TOI-561b in the list of oldest planets yet discovered. The Milky Way galaxy is thought to have been formed about 12 billion years ago, and this star and its planets (there are two more, gaseous and larger) formed about 10 billion years ago. It dates back to the time when most of the stars in our galaxy had just been born. For comparison, our Sun is only 4.5 Billion years old.

Even though astronomers can figure out the current status of the exoplanet, the mere fact that it is 10 Billion years old means that it might not have always been as it is now. It is possible that at one point in time, the conditions on it were just right for life to take hold. Although it might be impossible to verify that now.