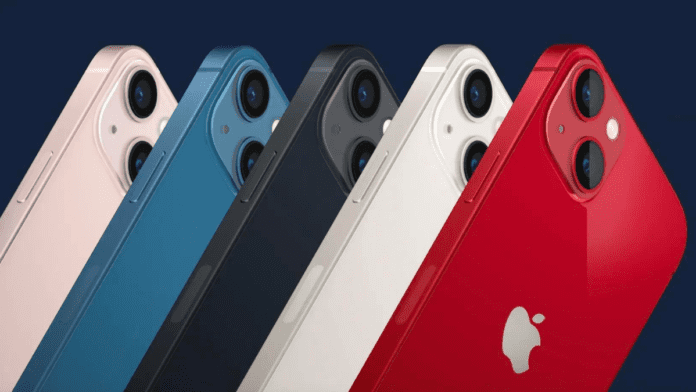 The big day is finally here. Apple has officially unveiled iPhone 13 and iPhone 13 Mini at its California streaming event. As speculated earlier, the new series of iPhones hasn’t undergone a major design overhaul. The iPhone 13 series is more like Apple’s previous “S”-series models, which used to offer minor improvements and refinements over last year’s models. The series has finally cut down the notch so that it takes up less space. The new iPhone 13 and iPhone 13 Mini feature an all-new A15 Bionic chip, improved cameras, brighter displays, and more! Let’s check them out.

As for the iPhone 13 Pro lineup, we haven’t forgotten about it yet! It has its own article. Go check it out, as well!

The Notch is Trimmed. Finally!

Just like last year, the entry-level iPhone 13 will have two models: the 6.1-inch variant and the compact 5.4-inch iPhone 13 Mini. Both have brighter OLED displays (in Apple’s words – Super Retina XDR), which the Cupertino based tech giant claims to be 28 per cent brighter than previous year’s iPhone 12 and iPhone 12 Mini. Unfortunately, the base iPhone 13s still don’t get the Pro’s stainless steel sides.

And yes (finally), iPhones feature a slimmed-down Face ID notch, which Apple claims to be 20 per cent smaller than the last-gen. Though the notch has gotten smaller, it doesn’t provide the same minimal look as the hole-punch cutout offer on Android.

A15 Bionic – The Competition is Still Catching Up

With the iPhone 13 series, Apple has debuted its all-new A15 Bionic processor, which is said to offer 50 per cent faster CPU and 30 per cent better GPU performance than its competitors. It’s based on the same 5nm process and has a new 6-core CPU with two high-performance cores. It’s presumably the world’s fastest mobile processor, boasting 15.8 Trillion Operations Per Second (TOPs). The iPhone 13 mini battery life is said to be 1.5 hours longer than its predecessor, while iPhone 13 can last 1.5 hours longer than the iPhone 12. The improved battery life has been made possible by A15 Bionic, more efficient components, a larger battery, and software improvements and optimizations.

Out of the blue, Apple has also announced the iPad (9th Generation) and iPad Mini today at the event. Go check it out!

Both the iPhones sport dual 12MP camera sensors at the back. Apple claims that the 12MP primary sensor, which has bigger 1.7micron pixels and an f/1.5 aperture, can catch up to 47 per cent more light than before, while the 12MP ultra-wide sensor, which has an f/2.4 aperture and a 120-degree field of view, can capture 50 per cent more light. iPhone 13 will also feature sensor-shift stabilisation, which Apple introduced last year on the iPhone 12 Pro Max. There is also a “Cinematic Mode” and “photographic profiles” feature as well. As for selfies, there’s a 12MP TrueDepth camera.

Other specs of the new iPhone 13 and iPhone 13 Mini include 5G connectivity, IP68 water and dust resistance, support for MagSafe accessories, iOS 15 out-of-the-box, and Ceramic Shield.

The base variants of the iPhone 13 Mini and iPhone 13 now starts from 128GB and has been priced similarly to last year. Both the iPhones will be available in 5 colours – pink, blue, midnight, starlight, and (PRODUCT)RED.

The iPhone 13 Mini will be sold in India at the below-mentioned price tags.

The iPhone 13 will be sold at the following price tags –