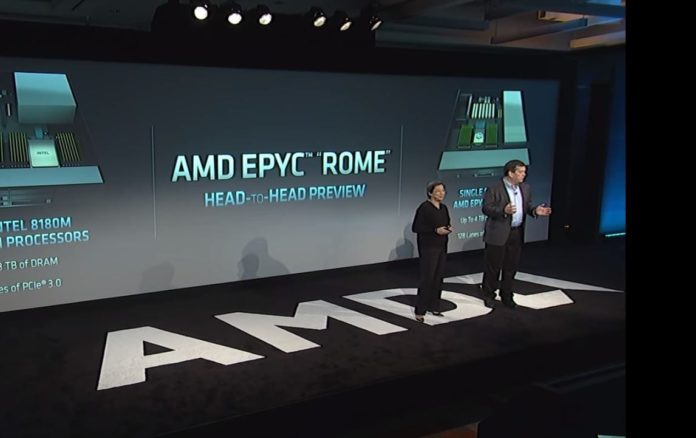 AMD launched the 7nm Zen 2 based Ryzen processors on the first day of Computex to an overjoyed audience, and although people were expecting a 16-core part as well, the 15% IPC gain over Zen+ is enough, at least for now. AMD’s single core performance is now on par with Intel’s Coffee Lake, and well, the multi-threaded scores were higher already. Better gaming performance coupled with affordable pricing is just what the mainstream CPU market needed after years of stagnation. Amid all the 7nm celebrations, AMD’s stocks have risen by 10% with analysts forecasting that Intel is set to lose more of its shares, both in consumer as well as the server segments.

The Zen 2 processors are up to 30% faster in gaming, and the 10-core Ryzen 9 3900X is half as expensive compared to the closest Intel’s chip while also being 5-15% faster (on an average). The single threaded performance is more or less on par with the 9th Gen lineup while the multi-threaded score is almost 30% higher. The gaming performance is also surprisingly 10-30% more potent compared to contemporary Kaby Lake processors, while the 64 Core Epyc “Rome” chip is in another league altogether.

The Zen 2 based server processors are twice as fast compared to the similarly priced Intel Xeon parts, and I’m quite certain that they’ll be cheaper too. Looking at these figures analysts are very optimistic of AMD’s future in the semiconductor industry.

While AMD’s value surged by around 10%, the competition didn’t do all that well. Intel’s stocked dropped by 2.25% while NVIDIA’s saw a decrease of 1.25% per share.