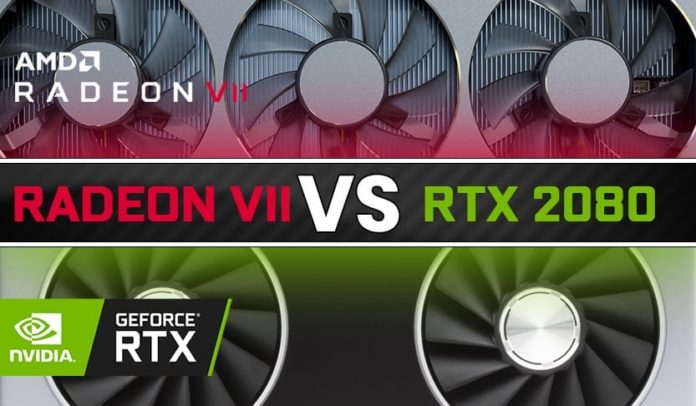 AMD released the world’s first 7nm consumer graphics card, the Radeon VII back in Feb, however amid shortages, most gamers couldn’t get hold of one at launch. Now, three months after launch, and a flurry of Vulkan titles where AMD cards seemed predominant, we evaluate the performance of the two high-end graphics cards and decide which one’s worth the $700. We’ll stick to only DX12 and Vulkan based games in this test for the sake of relevance:

Shadow of the Tomb Raider was one of the first titles to support NVIDIA’s RTX technologies, including ray-traced ambient occlusion and DLSS. Despite being an aggressively marketed GeForce title, , the delta between the RTX 2080 and the 7nm Radeon flagship is quite nominal and almost disappears at 4K.

To make it fair, we decided to throw in 2 as the second title on this list. Being an AMD sponsored title, it somewhat balances things. However, the GeForce RTX 2080 is faster than the Radeon VII at both the resolutions by roughly 5-7%. Tom Clancy’s The Division 2 is based on the Snowdrop engine and leverages most technologies such as enhanced Asynchronous Compute support and a low CPU overhead. The game is pretty well optimized and the newer API grants a healthy performance boost across all AMD and NVIDIA GPUs.

Bethesda’s Rage 2 is the only vendorneutral game on this list and although at 4K both the GPUs level with each other, at 1440p the RTX 2080 edges out by just a few frames. Rage 2 is based on the Open-Source Vulkan API developed by Khronos and has seen widespread adoption by both AMD and NVIDIA as well as publishers like EA and Bethesda.

World War Z was one of the more disruptive Vulkan titles at the time of launch. The older 1st Gen Vega cards were able to beat the $1,200 NVIDIA flagship at a mere fraction of the price, but recent driver updates have significantly improved performance on team green’s side. At 1440p, the AMD Radeon VII is approximately 20% faster than the GeForce RTx 2080 while that delta shrinks to just a few frames at 4K. That’s an impressive comeback from NVIDIA. A while back, the Turing cards were reeling and it almost seemed like the game hated GeForce hardware.

Metro Exodus is another GeForce title, featuring a slew of RTX tech from ray-traced AO to global illumination and DLSS. NVIDIA’s optimizations go pretty deep here, with the 2080 being more than 20% faster than the Radeon 7 at both 1440p as well as 4K. Keep in mind, this test was conducted using DX12 with all GeForce technologies turned off.

So yeah, seems like the NVIDIA GeForce RTX 2080 is still a better buy than the Radeon VII. It was either faster than the latter in every game we tested or more or less on par with it, with the exception of World War Z where team green is promising further improvements in performance in the future. In case, you are hoping that the Navi family will save the day, then yeah, that’s not gonna happen. All the Navi GPUs will be notably slower than the Radeon VII and will compete with the GeForce RTX 2060 and 2070 instead. Cheers!