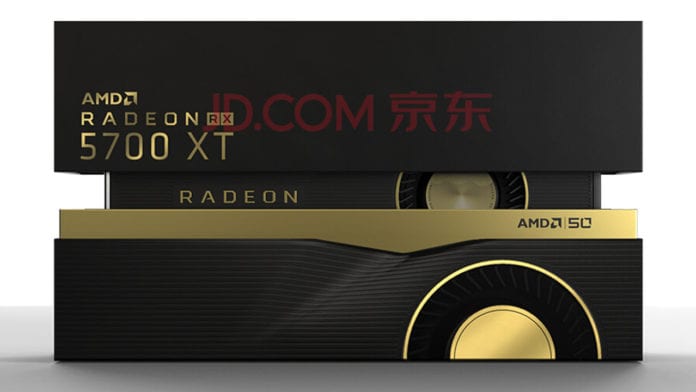 AMD unveiled its much anticipated Navi GPUs at Computex this year. The company launched three cards in the series, Radeon RX 5700, Radeon RX 5700 XT and a special RX 5700 XT 50th Anniversary Edition. These cards, manufactured on the 7nm process node, will hit the market on 7th July.

Although there are still a few days left for these cards to come out, Chinese e-retailer JD has already listed them on its website, revealing the packaging of these upcoming graphics cards.

Looking at the pictures, it has to be said that AMD has really improved its packaging compared to previous generations. The package boxes look much more premium and cleaner, befitting the kind of GPUs they’re going to carry.

The special Radeon RX 5700 XT 50th Anniversary Edition GPU will be delivered in a rectangular box with the card sitting inside vertically, exactly how NVIDIA packs its Founder’s Edition cards. The box will have a black and golden colored theme. The outside of the box has a part of the GPU printed on it. Apart from this, there’s also AMD CEO Dr. Lisa Su’s signature on the shroud. This card, being a special edition, will be available in a limited quantity and is expected to cost $499.

The standard AMD Radeon RX 5700 XT has pretty much the same packaging as the special edition card with the card sitting vertically inside with the only difference being the color theme used. This one will carry a vintage AMD Red and Black colored theme with a part of the card printed on the outside. The Radeon RX 5700 XT will retail for $449.

Coming to the AMD Radeon RX 5700, the packaging for this card is quite different from other models. Since this card is being intended for the entry-level market, the unboxing experience wouldn’t be as premium as the other models. The Radeon RX 5700 comes in a plain cardboard box with the same Red and Black colored theme as the RX 5700 XT, there is a picture of the GPU printed on the outside. The card is placed in a horizontal position inside the box just like any other basic package.

These graphics cards will hit the markets starting from July 7th. There is still no word regarding the availability dates of the custom models of the RX 5700 and RX 5700 XT but they’re expected to launch in August.