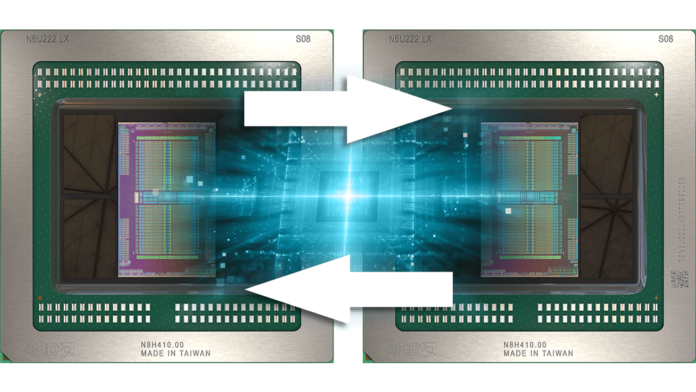 AMD has unveiled the Radeon Pro Vega II and Vega II Duo workstation graphics cards that’ll fuel the new MacBook Pro, coming in Q3 2019. Despite what Apple or AMD may have you believe, this is the same old 2nd Gen Vega chip leveraging the 5th iteration of the GCN architecture, coupled with a crap-ton of HBM2 memory. That’s not to say that it won’t be sufficient to satisfy your creative needs.

The Radeon Pro Vega II comes with 64CUs or 4,096 Steam processors, paired with 32GB of HBM memory via a 4096-bit bus, resulting in a massive bandwidth of 1TB/s. The graphics core has a maximum boost clock of 1.7GHz, resulting in an FP32 performance of 14.2TFLOPs. The card is quite similar to the recently announced 7nm Radeon VII, and the two leverage the same manufacturing process, while also sharing the same basic characteristics as the Radeon Instinct MI150 and MI160.

The Radeon Pro Vega II Duo packs two Vega II GPUs, essentially doubling the Compute horsepower and the memory, albeit the bandwidth and bus width unchanged. This culminates in an insane 28.4TFLOPs of FP32 and 56.8TFLOPs of FP16 performance.

The two GPUs are connected by AMD’s Infinity Fabric, and unlike the standard Vega GPUs, the ones in the MacBook Pro don’t have any external power connectors. The Vega II relies on the PCIe x16 slot (75W) for power, complemented by Apple’s custom PCIe connector which can draw up to 475W of juice to feed the power-hungry Vega chip.

One of the highlights of this announcements is the MPX Module (Mac Pro Expansion) which can couple two Radeon Pro Vega II or Vega II Duo cards, allowing you built a graphics powerhouse for the most intensive rendering tasks. To give you an idea of the processing power we’re talking about, you are looking at 56.8 TLOPs of FP32 performance, double the FP16, backed up by 128GB of HBM2 memory.

You have the option of one HDMI 2.0 and four Thunderbolt 3 (40GB/s) ports for connecting multiple displays. Considering that the lowest end MacBook Pro is priced at $6000, the ones powered by the Vega II will easily cost north of $30,000. In my opinion, like all of Apple’s products, the prices are far from justified, and it’s better to look for alternatives, and you’ve actually got many.