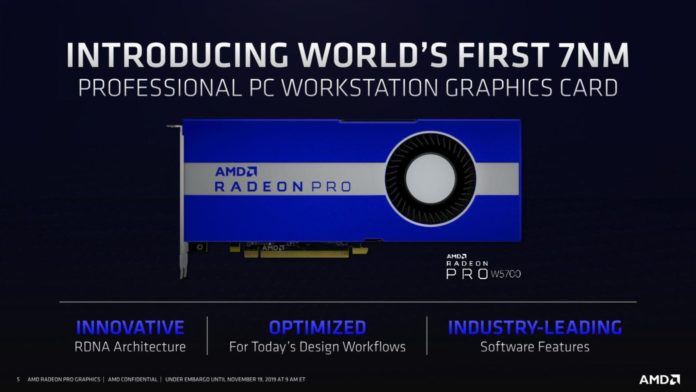 Back at CES when AMD unveiled its RDNA architecture “designed specifically for gamers”, I had the feeling that team red was going to redesign its gaming lineup using the new Navi GPU and keep GCN for compute oriented workstation graphics. However, it seems like AMD intends to use RDNA across the board in both consumer GPUs as well as workstations. The world’s first 7nm Professional graphics card was today revealed in the form of the Radeon Pro W5700.

Compared to the older Vega WX 8200, AMD is promising an average performance advantage of up to 41% (per watt). Looking at the power profile of the consumer Navi 10 cards, this falls in line with what we’ve already seen in gaming workloads. Considering that the W5700 is clocked higher by 200MHz, it’ll be interesting to see how much of a difference will it cause with respect to the average power consumption.

Compared to NVIDIA’s Quadro RTX 4000, the W5700 performs more or less on par in most applications while drawing the same level of power. Of course, the Quadro will still have a big advantage in applications that leverage the RTCores for BVH acceleration and the Tensors for AI-related workloads but it is pricier too. Furthermore, for traditional workloads that don’t take utilize NVIDIA’s candies will see the W5700 perform roughly the same as the Quadro RTX 4000 while costing a good $200 less.