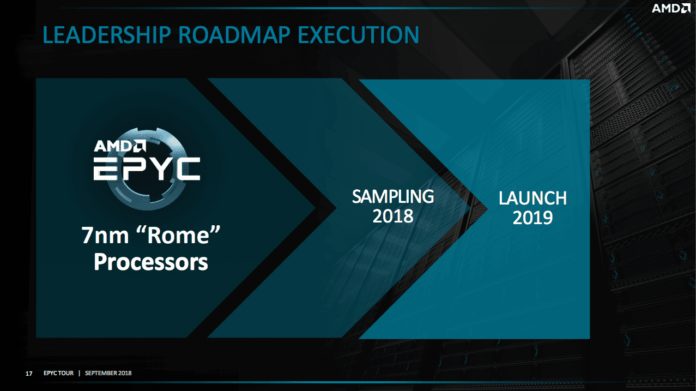 Leaked benchmarks of the AMD EPYC Rome server processors were posted on OpenBenchmarking and although they were quickly taken down, wccftech managed to grab a copy.

The benchmark compares the 32 Core 64 Thread EPYC 7452 – a Rome family chipset – against the Intel Xeon Gold and the previous gen AMD EPYC Naples.

The EPYC 7452 which is based on the 7nm Zen 2 architecture was seen to maintain a clock speed of 2.35GHz which is quite significantly higher than the EPYC 7551 Naples chip based on 14nm Zen architecture at 2.00GHz.

Now keep in mind that these tests were done in dual socket mode so there are a total of 64 cores and 128 threads here. The Intel Xeon Gold variant they were compared to was the 6148 with 20 cores and 40 threads at base 2.40GHz and a 3.70GHz turbo which was also running in a dual socket configuration.

Specification wise this comparison might seem unfair but when comparing prices its reasonable, since the Xeon costs nearly $3000 while the older Naples is around $3600 and the newer Rome will definitely bring that down. The Xeon Platinum 8280 with 28 cores and 56 threads seems more fair but it also costs $10,000.

Coming to the benchmarks, the comparison was done using standard server workloads like C-Ray, SmallPt, OpenSSL, build-php and the like. In most of them (4 out of 6) the EPYC 7452 was notably higher than the rest.

Additionally Chiphell Forums also provided a first look at the CPU itself which appears to be using a green case.