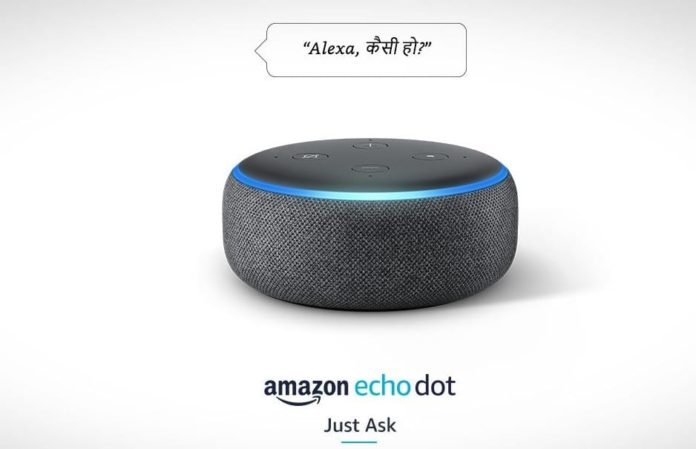 In a bid to increase the existing user-base and enhance the accessibility of the users already part of their ecosystem, Amazon on Wednesday announced the release of Hindi and ‘Hinglish’ language support for its range of Alexa devices.

Users can start using it right away by simply asking Alexa to “help me set up Hindi” or changing the language settings in the Alexa app. A range of commands, similar to the ones in other languages, can be used such as asking to play songs[“Latest gaane sunao”], checking cricket scores[“cricket score batao”], the news, jokes, games, weather, reminders and so on, you get the idea.

To further enhance the capability and integrate it with existing third party apps, developers have already been given access to the Hindi skills two months ago and around 500 third party Alexa skills are also said to be currently available, including the likes of Ola, RedFM and Amar Chitra Katha.

“We are thrilled to bring a suite of AI advances in multi-lingual understanding so that customers can interact with Alexa in different regional variants of colloquial Hindi. We are grateful to Indian customers who contributed to Hindi development through the Cleo skill.”, said Rohit Prasad, Vice President, and Head Scientist, Alexa AI, Amazon, in a statement.

India has just undergone a massive surge in the number of internet users with almost 600 million people currently online and millions more expected to come.

“India is somewhat unique in the degree to which multilinguality is expressed,” Prem Natarajan, an Alexa vice president heading the effort to teach the voice assistant new languages, told CNN Business.

“Diversity in India is expressed to an extent that one does not see anywhere else,” he added. “It’s very resistant to standardization of anything.”

The possibility of catering to each of the numerous local languages prevalent in India with the boom in the net usage is simply too lucrative an offer to pass, and Amazon has made sure it doesn’t miss the train. The other major player Google Home, powered by Google Assistant, already has Hindi support.

Amazon has declined to comment on when, if any, will the rest of the Indian languages be available on Alexa, but they are working on a bilingual language support.

This would enable users to hold conversation in both Hindi and English and Alexa can respond appropriately in the detected language without having to change the language settings. This is expected to be available around the Diwali period(Late October).

Hindi support will also extend beyond just the Echo devices to any devices with built-in Alexa support, with brands such as Bose, Motorola, Sony, Boat, iBall and others launching or updating their existing Alexa-built in devices to support Hindi.

Amazon Alexa devices start as low as Rs.3999 for the Echo Dot(3rd Gen).