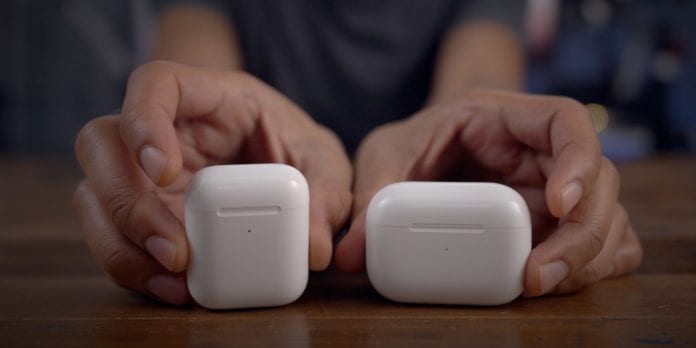 In 2016, Apple disrupted the market with the Airpods which became one of the important parts of Cupertino giants trillion-dollar revenue. Now, according to a report from Bloomberg Apple is working on the new Airpods which are scheduled to debut in the first half of 2021.

The upcoming entry-level AirPods will be succeeding the 2nd gen AirPods, which is less of a second-generation as there’s no difference between it & the first-gen. With the new 3rd-gen, the Cupertino giant is opting for more of an AirPods Pro look with changeable ear tips. Don’t expect any Pro features from it though but Apple is said to be improving battery life in the upcoming AirPods.

The AirPods Pro are getting a design overhaul and with the new design, Apple is trying to eliminate the stem and make the second-gen AirPods Pro much rounder and smaller. The new design will make them very much like the Galaxy Buds Live, Google Buds, and various other earbuds. The reports further add that the Cupertino giant is facing some difficulties with integrating all the components inside the new design so chances are that we might not get to see what Apple might have imagined.

The report suggests that Apple is working on new wireless chips for the new AirPods. It further adds that Luxshare Precision Industry Co. and Goertek Inc. are chosen to handle most of the manufacturing for the new earbuds.

Apart from new AirPods, Apple is also working on a new HomePod which might sit between the recently announced HomePod Mini and the larger HomePod in terms of size and sound quality.

According to the report, AirPods Studio, Apple’s over the head noise-canceling headphones are still under development. An insider claims that they are delayed again due to the problems with the headband, as it was found to be too tight in some testings. The current version of AirPods Studio has smaller touchpads on the sides of the headphones and Apple has also ditched the interchangeable headbands but it can get the option to change earpads as per your comfort.