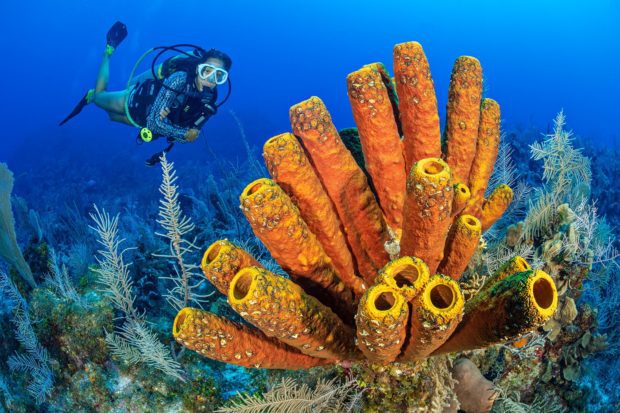 A Canadian researcher may have found an 890-million-year-old sponge fossil, the earliest fossil record of animal life on Earth, dating to a time called the Neoproterozoic Period. According to a report published in the journal Nature, the fossils discovered in northwestern Canada could rewrite the entire history of animal life. The fossil discovered portrays distinctive microstructures from the body of a sea sponge built similar to a species living today called the Mediterranean bath sponge or Spongia officinalis.

Fossils found buried underneath in the rugged mountainous terrain in Canada’s Northwest Territories may provide a glimpse into the dawn of animal life on Earth. Sea sponges inhabited primordial reefs built by bacteria millions of years ago. The study showed that the area of steep mountainous northwest Canada was a prehistoric marine environment where the remains of 890-million-year-old sponge fossils may be sustained in mineral sediment.

Relatives of the humble sea sponge have filtered Earth’s waters for hundreds of millions of years or more, long before the first plants ever bloomed. Their simplicity has led scientists to believe that sponges were the primitive animals to arise on our planet. In reality, whenever a person thinks of animals, a sponge may not immediately come to mind but sponges are aquatic invertebrates with internal skeletons, soft, and porous bodies. They survive fixed to the seafloor and are among the most successful animal groups to exist.

“The earliest animals to emerge evolutionarily were probably sponge-like. This is not surprising given that sponges are the most basic type of animal both today and in the fossil record,” said a sedimentary geologist Elizabeth Turner of Laurentian University in Sudbury, Canada who conducted the study. “They lack a nervous, digestive and circulatory system. They have an amazing water-pumping machine, produced by specialized cells, that they use to move seawater through their bodies to filter feed,” Turner added.

Geologist Elizabeth Turner discovered the 890-million-year-old sponge fossil from ancient microbial reefs. They were preserved in the rocks of a secluded terrain in the Northwest Territories accessible only by helicopter. Only visible under the microscope, thin sections of its rock contain three-dimensional structures that mirror modern sponge skeletons. It comprises tiny tubes that branch and are assembled to form a 3-D meshwork. Turner said that the 890-million-year-old sponge fossil appears to have sustained in cavities just below the reef surface and in surface depressions.

Dispute regarding the credibility of the 890-million-year-old sponge fossil discovered:

Most major groups of animals such as arthropods, molluscs— first appeared 541 million years ago during the Cambrian explosion. But according to the new discovery, the dating of adjacent rock layers found in Canada indicates the samples are about 890 million years old, which makes them about 350 million years older than the primitive animals, significantly pushing back the date of Earth’s earliest-known animals.

“If I’m right,banimals emerged long, long before the first appearance of traditional animal fossils,” says study author Elizabeth Turner, “That would mean there’s a deep back history of animals that just didn’t get preserved very well.”

This news of the 890-million-year-old sponge fossil is kindling a debate among palaeontologists, who have long confuted theories regarding when complex animal life first evolved on Earth. There are some scientists who are not fully satisfied that the microscopic patterns in Turner’s 890-million-year-old sponge fossil point towards an ancient sponge, given the evidence provided in the study.

“It’s such a big claim that you really have to eliminate all the other possibilities,” says Rachel Wood, a geoscientist at the University of Edinburgh, UK. She researches exclusively on fossil reefs. “Microbes, for example, produce weird and wonderful shapes and forms.” Sometimes crystals also rise in a way that looks like patterns formed by living organisms, she says, indicating that the rock samples Turner found might not even be fossils in a true sense.

“I believe these are ancient sponges — only this type of organism has this type of network of organic filaments,” said Joachim Reitner, a geobiologist and expert in sponges at Germany’s University of Gottingen, who was not involved in the research.