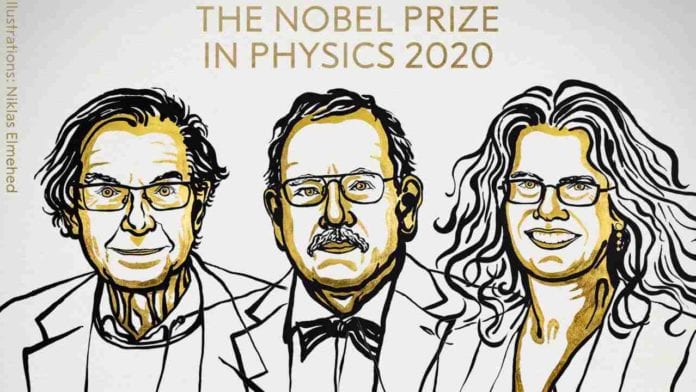 Three scientists – Sir Roger Penrose from Great Britain, Reinhard Genzel from Germany, and Andrea Ghez from the US together won the 114th Nobel prize in physics for advancing our understanding of black holes. Their work focused on black hole formation and the discovery of a supermassive black hole at the centre of our galaxy.

The physicists were selected “for their discoveries about one of the most exotic phenomena in the universe, the black hole, which has become a staple of science fiction and science fact,” the Nobel jury said. In the words of David Haviland, chair of the Nobel Committee for Physics, “The discoveries of this year’s Laureates have broken new ground in the study of compact and supermassive objects.”

The award, announced on Tuesday, was presented by the Royal Swedish Academy of Sciences with a gold medal and prize money worth 10 million Swedish kronor ($1.5 million). The prize was created by Swedish inventor Alfred Nobel, 124 years ago. The Nobel for Physics this year will be shared among the 3 winners, half of which would go to Penrose and the other half will be shared between Genzel and Ghez.

About the Nobel winners:

Professor Penrose, 89, is a British mathematical physicist based at the University of Oxford. He won his share of the prize for the use of innovative mathematical techniques so to prove the formation of black holes and explaining how it is an inevitable consequence of Einstein’s general theory of relativity.

He published a paper in 1965, using mathematical modelling to prove that black holes can form, based heavily on Albert Einstein’s general theory of relativity. It would have been a surprise to Einstein who himself had previously declared that black holes “do not exist in physical reality” in a paper in 1939.

Penrose joined forces with Stephen Hawking and produced new ideas on the formation of gravitational singularities and points of infinite density as found in the centre of black holes. Although the prestigious win will not stop him from working on his latest theories, Penrose added, “I always thought it is a good thing not to win the Nobel prize too early because if you get it too early, that is what you are thought of.”

Professor Genzel, 68, is a German astrophysicist who is the director of the Max Planck Institute for Extraterrestrial Physics. On the other hand, Professor Ghez, 55, is an American who works at the Department of Physics and Astronomy at the University of California, Los Angeles. Interestingly, Professor Ghez is just the fourth woman to receive the physics prize since 1901 when the prizes started for the very first time. She received it after Marie Curie did in 1903.

Since the early 1990s, Genzel and Ghez have led the research, concentrating at the centre of the Milky Way, on a region called Sagittarius A*. This black hole is thought to have a mass equal to that of about 4 million suns and a diameter of 24.2 million km. Both Genzel and Ghez were jointly awarded the Nobel for discovering “that an invisible and extremely heavy object governs the orbits of stars at the centre of our galaxy,” the jury said.

Under normal circumstances, they would have received their prizes from King Carl XVI Gustaf at a formal ceremony in Stockholm. Every year, the award ceremony is organized on December 10th, which marks on the anniversary of the 1896 death of scientist Alfred Nobel. It was he, who created the prizes in his last will and testament. The prize amount was increased recently keeping into account inflation.

However, due to the ongoing coronavirus pandemic, the in-person ceremony has been cancelled this year. Instead, it was replaced with a televised ceremony that showed the laureates receiving their awards from the comfort of their homes in their respective countries. Also, the announcement of the winners was delayed, the Nobel committee said, due to difficulties in contacting the winners.

This year’s Nobel season kicked off on Monday when the Nobel Committee awarded the prize for physiology and medicine to Americans Harvey Alter, Charles Rice and Briton Michael Houghton. They were awarded for the discovery of the liver-ravaging Hepatitis C virus, paving the way for a cure.