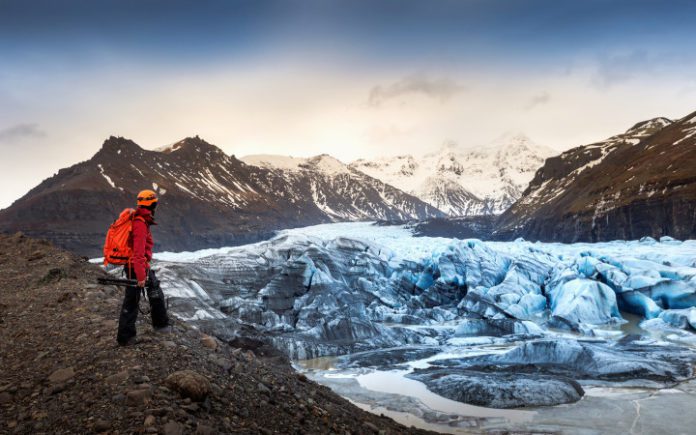 Scientists have recently found nearly 15,000-years-old viruses in the melting glaciers of Tibet, China that were previously unknown to humans. Most of these viruses survived because they had remained frozen in ice. The study may help understand how viruses have evolved over centuries and also discover new types of viruses. The study’s findings conducted by the team from Ohio State University has been published in the journal Microbiome. The researchers studied two different ice samples from the Guliya ice cap of the Tibetan Plateau in China- around 22,000 feet above sea level.

Each ice sample is made up of layers, telling stories of past climate activities and environments. The ice slabs had various substances trapped in them at the time of their formation. These 15,000-years-old viruses in melting glaciers likely originated with soil or plants. They are not animal or human-based and can adapt to extreme conditions, according to the study. The team inspected the ice and discovered the genetic codes for 33 viruses.

Four of those viruses have already been identified by the scientific community, but at least 28 of them were previously unknown to science. The four viruses in the Guliya ice cap that have been identified actually belong to virus families that typically infect bacteria. The researchers found the concentrations of the 15,000-years-old viruses in melting glaciers far lower than their normal levels when detected in other environmental areas like soil or ocean.

Viruses do not share a common, universal gene, so scientists haven’t really been able to name them just yet since naming a new virus and figuring out where it fits into the landscape of already known viruses involves numerous steps. To compare the novel viruses with the known ones, scientists compared gene sets that are catalogued in scientific databases for previously discovered viruses. The four viruses discovered, that seem similar, actually belong to virus families that usually infect bacteria.

“These are viruses that would have thrived in extreme environments,” said Matthew Sullivan, Professor of microbiology at Ohio State. He further added, “These viruses have signatures of genes that help them infect cells in cold environments — just surreal genetic signatures for how a virus can survive in extreme conditions.”

What led to the rising of 15,000-years-old viruses in melting glaciers?

Experts have pointed out the threat of viruses emerging out of melted glaciers long before. Researchers have stated that climate change is melting the permafrost soils that have been frozen for thousands of years, and as they melt, along with them ancient viruses and bacteria get released, that spring back to life just like the discovery of 15,000-years-old viruses in melting glaciers proves. Also, melting ice exposes massive reserves of sequestered greenhouse gases, like methane and carbon dioxide, that accelerate global warming — the primary reason for ice to melt in the first place.

An evident example from the past: In 2016, a 12-year-old boy in Siberia died and about twenty people were hospitalized after being infected by anthrax. The scientists at that time shared a theorized version that a reindeer infected with anthrax more than 75 years ago may have died, the frozen carcass of which, trapped under frozen soil may have become permafrost. The ice could have thawed which led the dormant virus to emerge because of severe heatwaves.

Factually, the rapid defrosting of the permafrost due to global warming has facilitated the discovery of several remains over the last few years, for example, an extinct cave lion cub in 2017, an 18,000-year-old prehistoric puppy in 2018, in 2019, and well-preserved bones of a 10,000-year-old woolly mammoth just the previous year.

In 2015, scientists found a 30,000-year-old virus Mollivirus sibericum that could still infect modern amoeba. The research of viruses in glaciers is relatively new as only a few studies before have identified viruses in ancient glacier ice but it is becoming more significant due to climate changes, as the ice around the world melts.

The lead author of the study that found the 15,000-years-old viruses in melting glaciers, Zhong said, “The glaciers in western China are not well-studied, and our goal is to use this information to reflect past environments. And viruses are a part of those environments.” “We know very little about viruses and microbes in these extreme environments, and what is actually there,” said Lonnie Thompson, professor of earth sciences at Ohio State University in the U.S., who also co-authored the study.

The questions like ‘How do bacteria and viruses respond to climate change? What happens when we go from an ice age to a warm period like we are in now?’ etc., remains to be answered. While the scientists are intrigued by the research potential these discoveries provide, the fact that global warming results in glaciers melting rapidly cannot be neglected. Further studies into ancient microbes are required to find suitable answers.